With day one of his maiden PwC Great Zuurberg Trek under his belt, Waylon Woolcock discussed the plans that came to fruition after he and his BCX teammate, HB Kruger, won the first stage.

As it was my first time here I didn’t really know where we entered into the single track and when we eventually reached it, after about 5km, Marco Joubert, Arno du Toit and Gert Heyns were all in front of me.

They are all very technical riders so they pulled away a little bit but the only thing I was thinking was that it was a long stage, there are three days of riding and you have to look after yourself and your bike, especially the tyres.

Lo and behold, after they’d gapped us we eventually caught up with them and we saw Arno had pulled to the side where he was busy fixing a puncture.

That played into our hands and they weren’t able to gap us again. 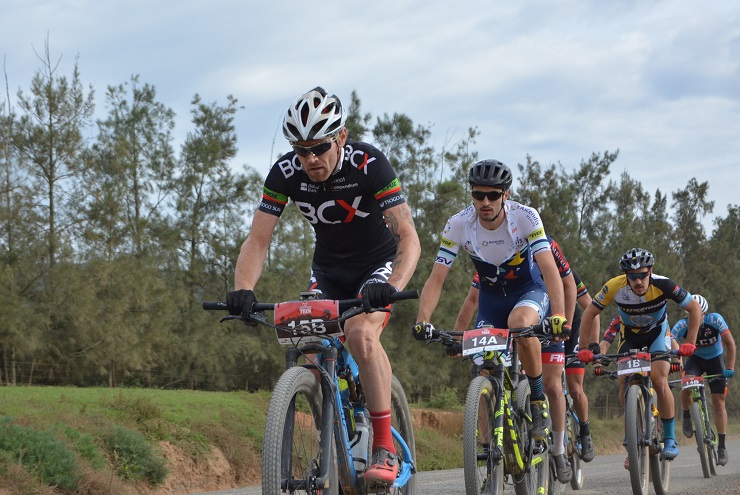 Waylon Woolcock leads the bunch as they approach the first water point on the first day of the Great Zuurberg trek. Photo: Full Stop Communications

What gave us a bit of confidence was the climb just before the first water point.

It was quite a rough, rocky climb that was quite steep but not too long and it was here that HB started putting the pressure on and gapped Arno.

We regard Arno and Gert as our biggest competition for the event so when HB went off at that stage, we sort of knew that that we’d probably be able to ride him off again at the end.

HB and I then had a chat and we allowed the guys to regain contact with us as we went down the other side.

Eventually we were four teams – Gert and Arno, Marco and Andrew (Hill) and then the Imbuko guys – and we shared the workload for those open district roads that followed.

HB and I had discussed our tactic for the final climb and we knew, barring any issues or crashes, that it would come down to just a few teams at the end.

It was at the bottom where all the action kicked off, with about 8km to go.

The climb is not super steep, but it is quite long and there are a few pitches where you could get a gap so it wasn’t a climb where you can go to the front and ride the guys off.

If you can attack the guys with a bit of speed and maintain your effort then you could get a gap, and that’s what our plan was.

As ex-roadies we employed those sorts of tactics and we did what’s known as counter attacking where one by one we go up the road.

HB started the last climb, which was about 8km from the finish, and put some pressure down and I stayed back to see what the others did.

Eventually Marco let the wheel go and HB and Andrew rode away.

When Marco dropped back it was Arno and Gert who were left but I could see they weren’t in a position to go around and close the gap between them and HB.

This told me they weren’t in the condition to maintain the pace so I let HB continue and create a gap before I attacked them and, luckily, I had enough in my legs to drop Gert.

Arno looked like he could have kept up, but he had to wait for his teammate.

I rode across to Andrew and HB before Andrew then pulled up to wait for Marco.

We then kept my tempo for a while as I recovered and I rode in HB’s slip before we hit the crest, which was about 3km from the finish.

The last few kilo’s still took some time because it wasn’t exactly flat but we still managed to put about a minute gap between us and the next guys.

We’re very happy to have won the stage and it’s nice to have a little bit of a buffer.

In mountain biking one minute doesn’t go too far, but going into tomorrow we’ll try and employ the same tactics as today.

We’ll try to ride safe and then it will be up to the rest of the competition to make up the time.

If we do see any weakness we’ll just try to take advantage of that.