Alistair Schorn had near misses with giraffes, battled through thick sand and got up close and personal with thorn bushes during the three days of the Liberty Waterberg Encounter.

As we drove into Sondela Nature Reserve on the first morning of the Liberty Waterberg Encounter the thermometer in my car told us it was one and a half degrees Celsius.

This wasn’t exactly a welcome sight before the start of a three-day stage race, in what is supposed to be one of the warmer parts of the Highveld. 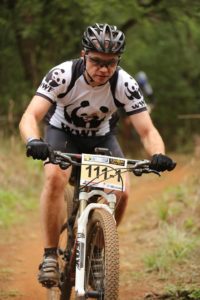 Fortunately the temperature went up in the hour leading up to the start and by the time we were sent on our way by the voice of South African cycling, Johnny Koen, conditions boded well for a pretty warm day out.

By the first water point many were looking for a way to dispose of warm-weather kit, while others were resigned to sweating things out in a somewhat overdressed state.

The route for day one took us on a 62km route from Sondela, east of Bela-Bela, to Elements Private Golf Estate, northwest of the town.

Day two was a 45km loop around Elements, while the final day took us in the opposite direction to day one as we headed back to Sondela.

While the distances weren’t extreme the routes comprised of dry and rocky trails, with a few sections of thick sand, some district road and some fairly nasty newly graded sections thrown into the mix.

This meant that concentration was at a premium, since even a moment of distraction could result in some unpleasant consequences.

Much of the route for the Waterberg Encounter is on private farms or estates, which are generally inaccessible to non-residents outside the event. This makes it a real privilege to ride these routes and several of the riders were rewarded with encounters with the local wildlife.

For my partner Brett and I, the undoubted highlight of day one was a herd of giraffe running across the road a few metres in from of us.

The sound of their rather large hooves of the tar left us very glad we hadn’t been a few metres further down the road when they came barrelling out of the bushes.

By contrast, our lowlight of the day was a rather torrid second half of the stage as Brett had started to feel the effects of a heavy crash a few weeks ago.

While this made a somewhat pleasant change (since I’m normally the one gritting my teeth to hang on to his back wheel), we were glad to see the very welcome sight of the finish line at Elements Golf Estate.

The Encounter is an upmarket event, more corporate than extreme adventure-focused and this is reflected in the route distances and choices of venue.

Having arrived at Elements, we were only too happy to take advantage of the hospitality on offer – from the bike wash and beers at the finish line, to luxurious showers and tents, to the chill zone, great food and entertainment, which were all on offer throughout the event.

Stage two served up similar conditions to the previous day – a little fresh in the morning but warming up pretty quickly.

Once again the course consisted of plenty of sketchy loose rocky terrain, with a few nasty climbs and river crossings thrown in for good measure.

Overall we had a better day out than the previous one and managed to stay pretty steady throughout the stage, with the exception of a wrong turn towards the end of the route.

Once back at the race village at Elements, most riders took the opportunity to chill out with lunch, a couple of beers or a nap (or all of these).

Alternatively, there was some afternoon entertainment, including the Springbok rugby test match.

The final day’s transfer back from Elements to Sondela turned out to be a bit of a sting in the tail as a long sandy section of a couple of kilometres played havoc. It tested balance and bike handling skills to the maximum.

In many cases riders were caught out or were forced to go careering through thorn trees just to maintain their forward momentum.

I also had a few near misses, from which I’m still sporting the scratches to prove it.

After that, the last few kilometres back in Sondela, on their purpose-built trails, were an absolute pleasure.

However, it did seem as though the local wildlife had a knack of excavating holes right at the apex of corners, or on the exit line.

Having negotiated these various hazards we were soon back at Sondela where a warm shower and excellent final prize-giving lunch awaited us.

As an overall MTB experience the event was excellent, combining high-quality hospitality with enjoyable (and at times challenging) routes.

The relaxed nature of the event, along with the relatively short stage distances, also meant that it provides a good introduction to stage racing for those who haven’t tried it before.

Credit must be given to the event organisers, ASG, who, as always, delivered a really smooth and well-executed event.

At the final prize-giving, there was talk of the possibility of some new events in the Liberty Encounter Series, to join the current Winelands and Waterberg events. If this proves to be the case, I’m sure many riders will be looking to experiencing these new events at the first possible opportunity.