Dana Coetzee and his wife Sanet Coetzee won the men’s and women’s titles at the Bestmed Sondela Mountain Bike Classic near Bela-Bela in Limpopo today. 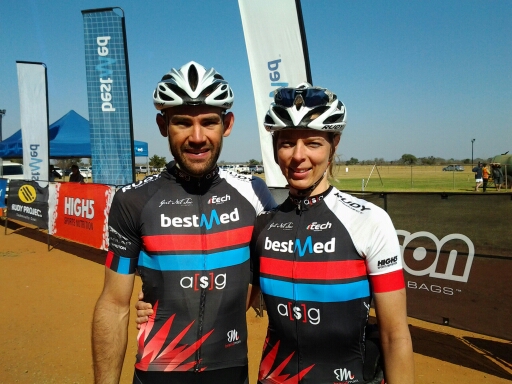 The 32-year-old from Pretoria said the pace had been fast from the outset with a small group arriving at a stretch of “horizontal climbing” after 5km.

“I went to the front and picked up the pace a bit and was able to open up a 15-second gap.”

The former pro said he dropped back to wait for Strauss, his teammate, after which they worked together to haul in the two leaders.

The Bestmed-ASG Vets rider said they stayed together until hitting a section with steep climbs and technical sections.

“About 30km in we hit a short, steep climb and I broke away there and held the gap until the end.”

Coetzee, who returned to racing recently after four seasons in the wilderness, said he found the course challenging.

“There are a lot of short, steep sections and the part through the valley is very technical,” said the winner of the 30+ category at the recent Vets and Junior Tour in Mpumalanga.

His spouse, who won the mixed section at the recent Liberty Waterberg Encounter over the same terrain, easily outclassed her opponents.

“My main focus was to stay in front with the guys and use them to pace myself,” said the defending champion from Team Bestmed-ASG.

The 33-year-old said she enjoyed the technical Bushveld terrain.

“The single-track was the same as at the Waterberg Encounter and came before we went into the rocky climbs and technical sections, which I loved.”

She said the sandy section of the course had again been a challenge, but that it was all about keeping momentum.

The professional mountain biker and road cyclist said she would now shift her focus to the road to prepare for the Bestmed Jock Classic in mid-June.