After walking away from cycling in 2009, Dana Coetzee continued his comeback to the sport at the Vets & Junior Tour that took place from the Swadini resort in the Blyde River Nature Reserve, Mpumalanga, this weekend.

He won the 30+ category and placed sixth overall after showing consistent form throughout the tough three-day event.

Coetzee placed sixth overall on the 130km opening stage and followed that up with eighth in the time-trial and sixth in the criterium on day two. On the final day, a road stage over 121km, he again placed sixth. 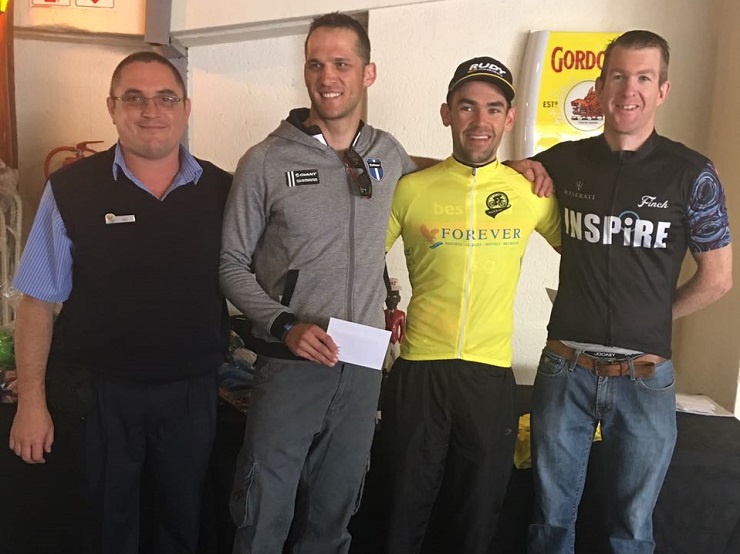 Dana Coetzee (yellow) finished first in the 30+ category at the Vets and Junior Tour at Swadini, a Forever Resort, this weekend. Photo: Supplied

He said the result would take pride of place among his personal achievements and ranked it alongside his fifth place finish in his category at the Bestmed Tour of Good Hope earlier this year.

“It’s been a long time since I last did a tour and this is definitely one of my better achievements,” said the Bestmed-ASG Vets rider. “At the end of the last stage I was a bit worried because I thought I might lose my position, but, after everything was completed, it was nice to hear I finished sixth.”

The 32-year-old, who returned to racing last year after a hiatus of four years, said it was great to see the different age categories competing against each other.

He said his comeback was curtailed by injury in 2016 and this year marked his first full season back in the peloton.

“I only really returned to racing this year and it’s all back to action from here,” said the Pretoria resident, who said he would line up at the Jock Classic next month before tackling the Jock Tour in September. “I like the climbs so my focus will be on both of the Jocks.”

Jason Oosthuizen (U19) and his father Thys Oosthuizen (40+) won their age groups and took the top two spots at the tour, with Martin van Wyk (40+) completing the overall podium.

For more news and results, go to Vets & Junior Tour.