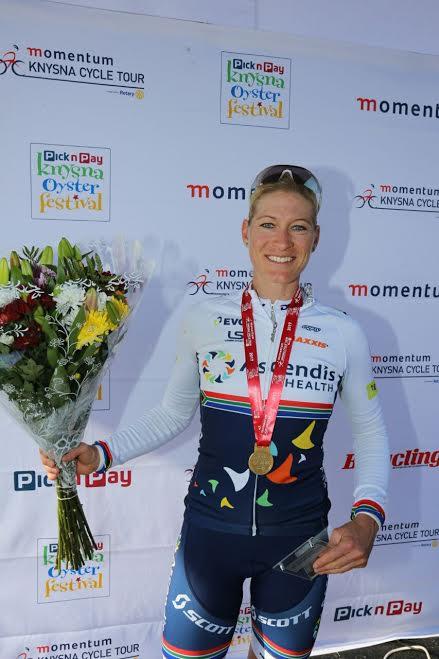 The Ascendis Health rider took a break following the UCI MTB Marathon World Championships, but said she always lined up to race properly.

“Although I have taken some time off, my plan was to race as hard as I could and it was a bit of a shock to the system – I won’t lie,” said De Groot.

She said that she knew the course well and was happy to come and support the local racing and Oyster Festival, especially that it had continued to go on despite the fires.

De Groot started the racing off on the wrong foot when she lost some time.

“I basically missed the bus. There was a group that got away, which Candice Lill managed to stay with.

“From the start I was not really in a very good position, basically lying in fourth place.”

De Groot managed to get a time gap of two minutes to Lill – who was leading the race – positioning her behind Yolande de Villiers and Carmen Buchacher, who were lying second and third respectively.

“I knew I hadn’t been training at a high intensity, but I thought that as the race went on I would probably start feeling better – which I did,” said De Groot.

“I slowly reeled De Villiers and Buchacher in and worked pretty hard to close the gap on the group that had Candice in.

“I was actually really surprised to catch them – I didn’t think I would. A little bit of determination goes a long way. From there I basically just recovered, to be honest, as I have worked pretty hard.”

De Groot said that as they came into the finish there was a section they crossed under the N2.

“This section can be pretty tricky and there was a bit of congestion,” she said.

“Candice opted to run her bike up the stairs, which all the other people were doing. I just stayed on my bike and rode, which I think was a good thing.

“I noticed that Candice struggled to get back onto her bike as she had some cramps.

“I just took advantage of the situation and hammered it until the finish. Once I saw I had a gap, I just kept going till the end.”

Matthys Beukes won the men’s race, with Gert Heyns and Matthew Beers rounding out the podium.