It was a tough day out at the National MTB Series in Van Gaalen for Declan Sidey but he took the good with the bad and finished ninth overall at Saturday’s event.

Standing on the start line of a National MTB Series event there is always a few things that are certain – the route will be challenging, the racing will be aggressive and the best marathon athletes in the country will be present.

Everyone was in good shape, looking to produce a top result. However, everything needs to go almost perfectly for that to happen. This was especially true at this weekend’s event as there was just 75km to settle all bets.

For the past six weeks I had been preparing for this event, working on short technical climbs, rocky descents and flat power sections. My goal was to finish in the top five, perhaps a bit ambitious for a first year amateur mountain bike racer, but it was something I felt was possible after my focused build up. 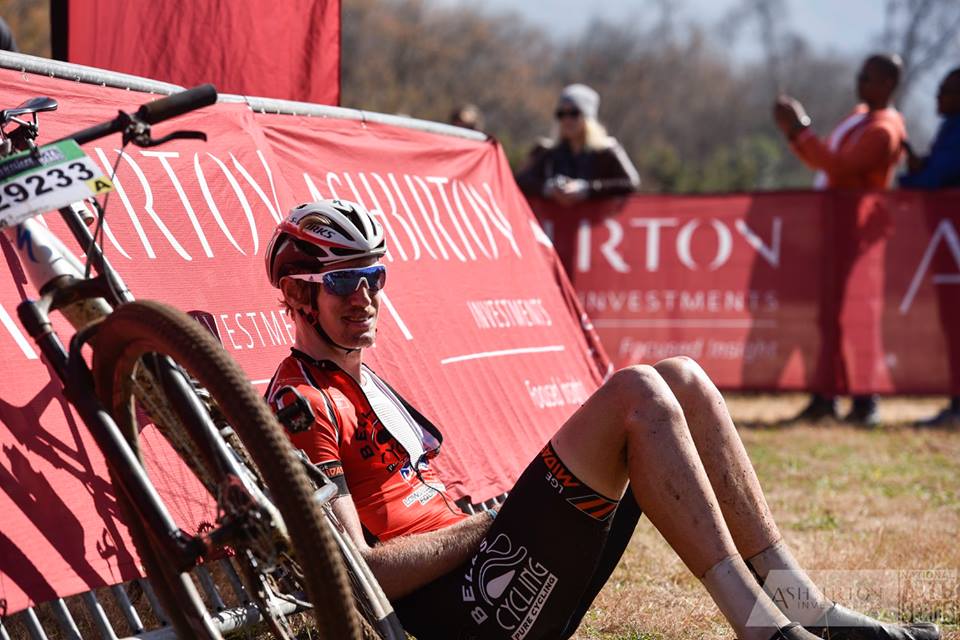 Mechanicals haunted Declan Sidey, but he persevered to salvage a top ten result at the fifth round of the National MTB Series this weekend. Photo: ZC Marketing Consulting

The start was bitterly cold, dusty and flat out from the gun. It all started kicking off properly after about 5km of racing, with Matthys Beukes and Gert Heyns edging off the front and Gawie Combrinck closing it down.

Thick sand, poor visibility and the familiar feel of lactic acid rushing to the legs quickly reminded me it was race day.

After the first drag, which felt incredibly hard, I stole a look back while trying to hang on. It turned out I was last wheel, with only a few others remaining up front. My plan had been to hang to the 40km mark, where I knew the terrain would be more favourable for me.

I felt somewhat like a cat with a long tail in a room full of rocking chairs. I was on edge, and, as a result, I was making mistakes. I punctured at the base of the first climb after reacting slowly and hitting my back wheel hard.

This turned out to be a persistent problem all the way to the first tech zone, which was 15km away, where I could get a wheel change. I was going well uphill but descending poorly as the deflating wheel made it more complicated.

Beukes and Davids had flown the coop in a real display of strength and technical ability while Philip Buys had been dropped as he also needed a wheel change.

I was able to see Nico Bell, Waylon Woolcock and Combrinck chasing the leaders on a zigzag section but after the stop at the tech zone and a poor change it was all about damage control for me.

I’d lost considerable time because of the change and I was well and truly on the back foot. I’d lost about four positions and needed to try and salvage something from the race. I set out determined to try and return to the top 10, at the bare minimum.

The pursuit was fairly uneventful. I reeled in Phillimon Sebona and Ben Melt Swanepoel on the last real climb. Wessel Botha and Julian Jessop were ahead, also suffering from punctures, which meant I was back into the top 10 fairly quickly.

My solo chase had me wondering why I had felt like a deer in the head lights and what could have been had I not been making mistakes. I kept reminding myself to never give up, regardless of the adversity.

This mindset was crucial as I caught Botha at the 60km mark. It was there that I somehow managed to smash my rear rim, cracking it and leaving the wheel leaking slowly.

I could call it bad luck, but it was more a case of poor riding. We make our own luck for the most part in bike racing and I had been my own worst enemy on Saturday.

I limped to the finish, salvaging a decent results by finishing ninth overall. Beukes managed to hold off Davids, while Heyns round off the podium.

Judging by the time gaps, it seemed to me that everyone, other than the top three, had a difficult day out on the incredibly challenging route.

Cruising home to the Lowveld I absorbed the day’s proceedings. The day had been a real hit and miss for me personally, more because of a lack of composure than a lack of shape.

There were some positives though. It’s easy to give up after a day like that and talk about what could have been. On the day ninth was my best and I’m satisfied with my efforts.

I now look forward to preparing for the final part of the season, where I will start the Clover Tour as a guest rider with NAD Pro MTB.