The Cape Town Cycle Tour will move from the start on Hertzog Boulevard to the Grand Parade Precinct in Cape Town, it was announced today.

In a press conference, director of the CTCT Trust, David Bellairs, announced the 2018 event would see the traditional start venue move to the historical Grand Parade Precinct.

“We’re confident that the 40th edition of the Cape Town Cycle Tour, which will take place on March 11 next year, will be a world-class experience for both spectators and participants alike.” 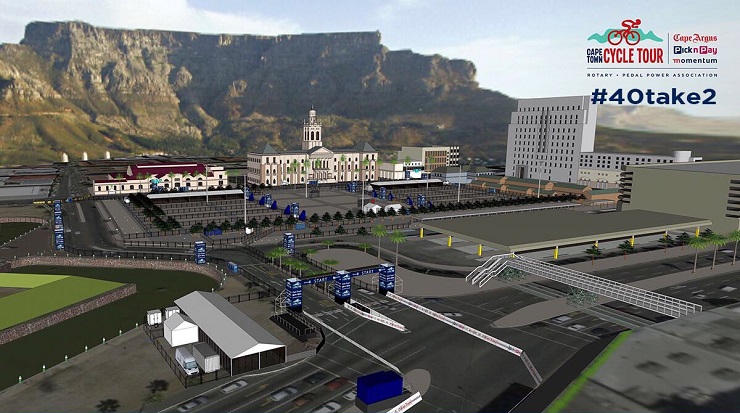 He said 2017 was by far “the most trying year in the 40 year history” and it was therefore necessary to consider all options that would minimise the possibility of having to cancel the event again.

“Since the morning of 12 March we’ve been hard at work looking at what can be done to mitigate the potential risks associated with what happened on that day,” said Bellairs.

“We have to ensure all possible avenues are investigated to enable us to minimise the risk of another cancellation.”

He said action was required to prevent a repeat of this year and, having realised there were areas immune to the city’s infamous winds, it was decided to make the change.

The event has undergone many changes in its 40 year history, including new start and finish venues in the 80’s. The start moved from Strand Street to Hertzog Boulevard and the finish underwent numerous changes as it moved from Camps Bay to Maidens Cove and eventually to Green Point Stadium.

He explained the Grand Parade was overlooked by City Hall and with the backdrop Table Mountain and was an “iconic” venue.

At the new location, organisers believed participants would not be subjected to the tremendous winds that saw riders blown off their bikes in March.

“We’re in the process of revising our wind guidelines as they relate to the start and finish of the event.”

In addition to the new start, Bellairs said there would be other changes to the event too.

“These include significant rework to the post-race village, improved offerings to corporates as well as an extended hospitality offering to the general participant.”

Bellairs said this was being done in conjunction with Disaster Management Services, the City of Cape Town, Pedal Power Association and experts in the meteorological field.

“We’re also excited to announce all the cyclists affected by the cancellation of the past cycle tour will be receiving guaranteed preferential entries before general entries open on September 20.”

He added entry fees would be pegged at the same fee and that riders would receive further communication in this regard.

Next year riders will gather on the historic Grand Parade and line up in Castle Street alongside the Castle of Good Hope and will follow the usual route around the Peninsula to the finish.

More news and results on this race

NEXT ARTICLE | Race village at Nederburg a bonus for Varsity MTB