A cyclist was attacked along Jan Smuts Drive in Cape Town this morning, the second attack along the road this week.

Isaac Fisher was travelling to work at 7am this morning when he was robbed of his bicycle. 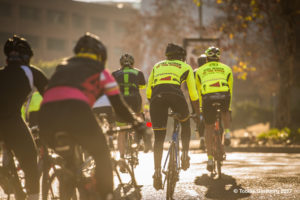 A cyclist was attack along Jan Smuts Drive in Cape Town today, the second incident this week. Photo: PPA

Pedal Power Association, who made the announcement via their social media platforms, encouraged riders to avoid the area after Fisher was left bruised and traumatised.

On Sunday a group of 13 cyclists were attacked along the same road.

Men armed with pangas and knives attacked and robbed the group, who were busy training for upcoming events.

One of the cyclists, Abdullah Jaffar, spoke out afterwards and said he had been shocked at the “brazen” nature of the attack.

In an article that appeared on IOL, Jaffar explained he had been knocked to the ground before the attackers made off with three bikes.

PPA’s CEO Robert Vogel said hijacking of cyclists was a common occurrence, yet little had been done to prevent it.

This morning’s attack is just one of a recent spate of attacks and accidents involving cyclists.

Earlier this month the cycling community celebrated a small victory when the driver that hit and killed Koos Roux in 2013 was sentenced to three years imprisonment.

Last months corporates and cyclists came together to start the Rite2Ride campaign in response to the death of well-known cyclists Greg Anderson.