Demacon’s Kim le Court did not expect to add the Cape Town Cycle Tour title to her palmarès after winning at the stadium on Sunday.

“I wasn’t too sure if I expected to win or not because I wasn’t very confident in myself as I haven’t been on the top step in a while,” said Le Court, who finished the 76km race in 2:11:50.

She felt her team played a huge role in her claiming the 40th title after they planned that she would be the leader on the eve of the race. 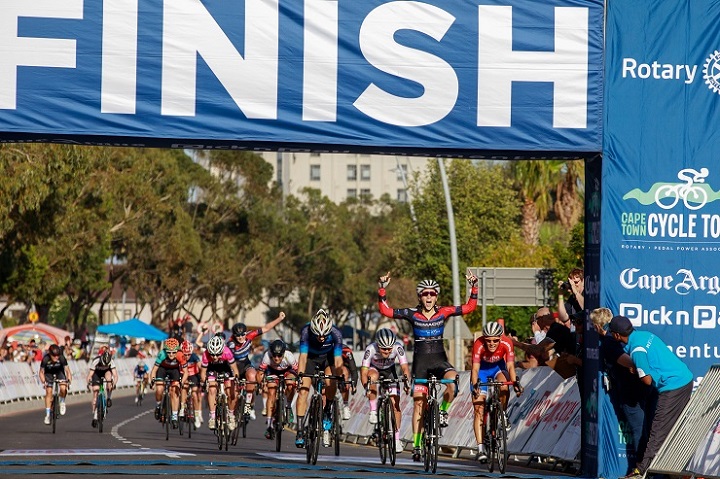 “They were very confident in me and had the tactics of taking me to the line and making me win. With that in consideration, it was meant for me to win, which actually worked out perfectly towards the end.”

Their strategies included Carla Oberholzer and Heidi Dalton looking after her, while Lynette Burger would relax in the bunch and look for moves.

“Lynette got into a break, which was good for us because we had no chasing to do. After Suikerbossie I followed her wheel, because with the amount of experience she has she would be able to take me to the line easily,” said Le Court.

The Mauritian national felt very emotional when she crossed the line and only then realised what a big achievement it really was.

“This race is actually massive. I knew it before, but now that I’m the winner, it’s bigger than I thought. It’s insane the amount of support I’m getting from all around the world.

“After I won I just cried in my teammates’ arms. I was really thrilled and I couldn’t believe that I actually won for Demacon, my family and everyone who supports me. I’m so happy I could pull it off for them.”

This was a much-needed confidence booster for the Demacon rider, and she felt she had remotivated herself and the team.

“I’ve been training quite hard recently, so I’m proud of myself and I thank the team with all my heart. They actually believed in me to take the win.”

Next on the Cape Town Cycle Tour champion’s agenda is the Commonwealth Games, for which she will be flying to Australia.

“I’ll compete for the Mauritian national team, so I’m very excited. Just being selected for the games is an achievement on its own. I’m going to see it as a massive experience and want to try get a top-20 result, which is actually crazy.

“That would be the cherry on the cake type of goal for me,” said Le Court.