Nolan Hoffman used his speed in the final sprint for the line to take the honours in the opening stage of the Bestmed Tour of Good Hope near Paarl in the Western Cape today.

The 33-year-old BCX pro completed the 132km route in a time of 3:17:15 to shade Rohan du Plooy (Alfa Bodyworks-Giant) and Italy’s Luca Mozzato (Dimension Data Continental) over the final 200m.

Saying the stage was tailormade for his style, Hoffman was delighted with the victory. 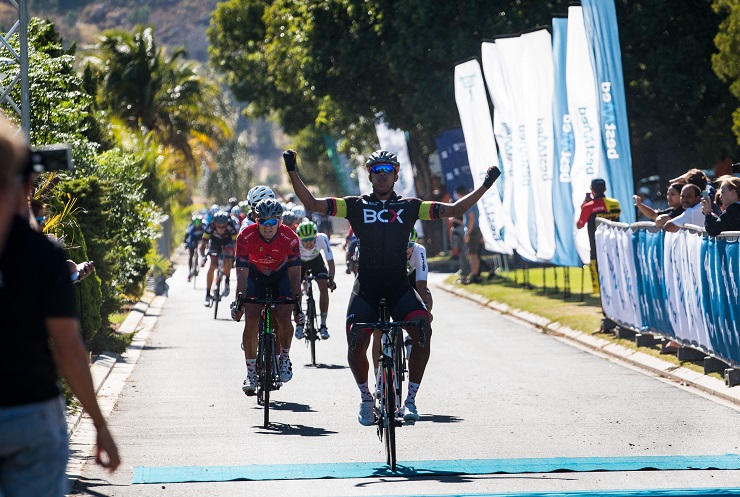 BCX’s Nolan Hoffman crosses the line to win the first stage of the Bestmed Tour of Good Hope, which finished at the Drakenstein Correctional Centre near Paarl in the Western Cape today. Photo: Robert Ward

“It’s great to start a stage race on the front foot and this outcome was due to the teamwork of BCX.”

“There was quite a crosswind during the stage and my teammates did a fantastic job of protecting me from that.

“The plan was to deliver me for the final sprint and they did that to perfection.”

With Reynard Butler of ProTouch setting the pace going into the final corner, Hoffman said he got onto his rival’s wheel and waited for his chance.

“With about 150m to go, I put my head down and did not look up until I crossed the line.”

After a break away at the 35km mark by Brendon Downes (BCX), Luthanda Kaka (Velokhaya) and Ricardo Broxham (ProTouch), Hoffman said they decided to see how the stage unfolded.

The leaders were eventually hauled back after 102km and his team set him up perfectly for the sprint finish.

Namibia’s Vera Adrian, who races for dormakaba, also won in a dash for the line, edging former champion Ariane Luthi (Team Spur) in the women’s race. 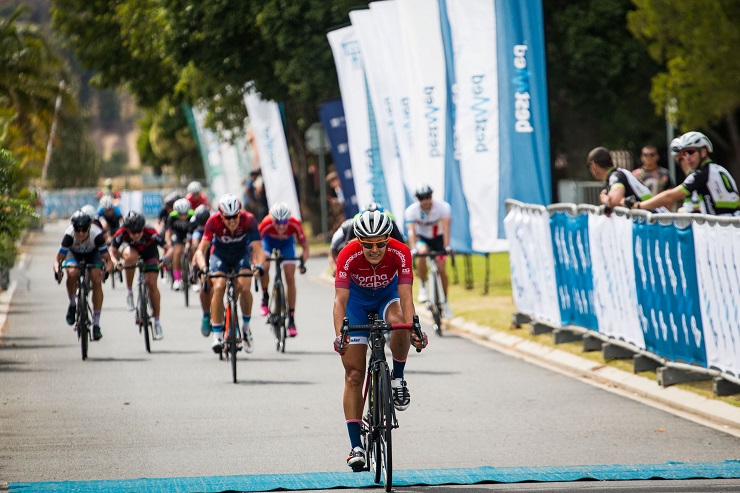 Namibia’s Vera Adrian of dormakaba wins the first stage of the Bestmed Tour of Good Hope, which finished at the Drakenstein Correctional Centre near Paarl in the Western Cape today. Photo: Robert Ward

She crossed the line in 4:01:53 with Luthi two seconds behind. London-based Anneleen Bosma was third in the same time.

After a slow final 10km, Adrian said it picked up towards the end when Catherine Colyn and Liezel Jordaan set a faster pace.

“Just before the last corner, with about 250 metres to go, Yzette Oelofse went to the front and I was lying second.

“I hoped it would come down to a sprint and with about 200m to go I just put my head down and went for it.”

Presented by Scicon and the City of Drakenstein, the race’s focus will now switch to tomorrow’s 26.5km time-trial, which will finish at Boland Agricultural School just outside Paarl.