South African Jay Thomson expects a “crazy fest” of racing on the way to the finish of the 257km Paris-Roubaix in Northern France today.

Having undertaken a route recce of the last 105km on Thursday, Thomson said it was muddier and more slippery than he had seen it before.

“It was super wet after the rain,” the DiData rider told In the Bunch. “It could make everything more complicated than in previous years when we experienced dry weather and dusty cobbles.” 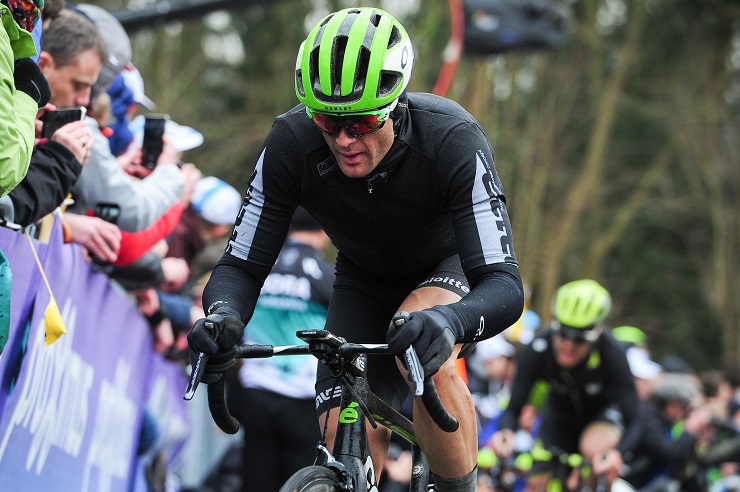 Jay Thomson, pictured here at the Tour of Flanders last week, expects a “crazy fest” of racing on the way to the finish of the 257km Paris-Roubaix today. Photo: Stiehl Photography

The one that stands out for him, is the Le Carrefour de l’Arbre, a 2.1km cobbled stretch about 15km from the finish.

“Every cobblestone section brings a massive selection in the field,” Thomson said. “Guys get dropped, they pick up punctures, you see crashes and teams begin to accelerate. It can become a crazy fest.

“Le Carrefour de l’Arbre really stands out. There are cobbles in every direction, there are holes and there are sections where cobbles have sunk. It is unreal; I cannot explain how crazy that section is.”

Thomson predicted that the racing would be heated from the start. “The first few sections already produce some sort of selection.

“If you are the last wheel going onto the first section of cobbles ‒ sector 29 ‒ you are already in for a long day, because you’re going to be forced to fight all day to move forward.

“The front guys will continue accelerating and you will have to break at the back. If you are not at the front you will be fighting for something different. The first sectors may make or break the race until the Trouée d’Arenberg.”

Thomson, who hails from Krugersdorp, said their team’s main objectives were to support Edvald Boasson Hagen in the 116th Paris-Roubaix, often known as the “queen of the cobble classics” and the “Hell of the North”.

“The plan is to get as many of us as deep as possible into the final,” he said. “Edvald has shown his form is building with every classic. He really loves this race and has a passion for it.

“He has the power to do well, so the more guys we can get into the final, the better for our chances. A podium position is not out of reach for Edvald.”

The race, Thomson said, is normally “very unforgiving; definitely the Hell of the North. You know you have been on your bike when it’s is over.

“Your hands, feet, elbows, hips and back all hurt; even your head. Everything gets rattled; you almost shake to pieces. It’s gruelling and unforgiving.

“Luck has much to do with it. And power. The strongest man normally wins. You will not win if you do not have the legs.”