Despite suffering mechanical problems, South African Jay Thomson was happy with his achievements in the gruelling 257km Paris-Roubaix, which finished at the Roubaix Velodrome in northern France yesterday.

DiData’s Thomson made it into a decisive nine-man break around the 45km mark and stayed in that leading bunch for almost half the race until the break was caught at approximately 170km.

Thomson said for him it was important to get ahead early on in the race. “Everyone wants to make it into the break in such a big race as the Roubaix,” Thomson told In the Bunch today.

“It was important to get the advantage – with a smooth rhythm – heading onto the cobbles. If you come from behind you will be forced in a bunch sprint on to every set of cobbles.

“If you’re not in the front you have to break before every set of cobbles and you lose momentum, while guys are crashing and puncturing everywhere around you. It can get crazy.” 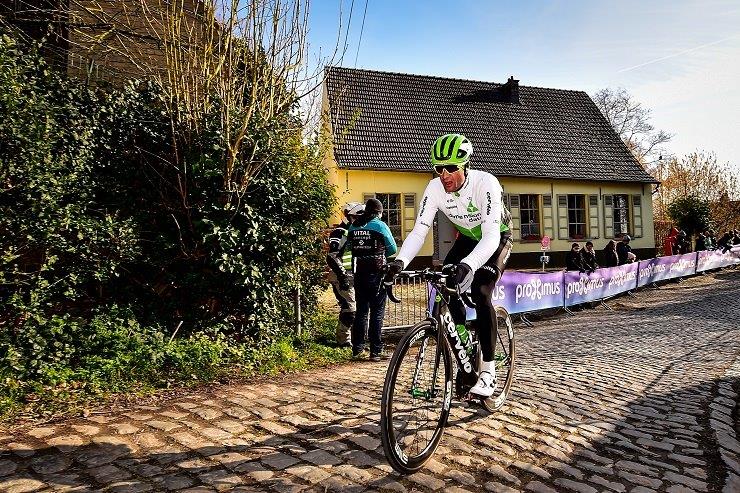 Jay Thomson, pictured here at the Omloop Het Nieuwsblad two months ago, was happy with his achievements in the gruelling 257km Paris-Roubaix despite a mechanical setback. Photo: Stiehl Photography

It was a “big fight” to get into the break, Thomson said. “I somehow managed to get in there after six guys were already up the road and two other guys came across.

“I was the last guy to escape from the bunch and I rode across to the front guys. It was a good day out.”

A chain mechanical then set Thomson back, preventing him from going further, he said.

“It was a bit disappointing to not be able to go on,” he said. “It was a frustrating moment because I was only able to use my small chain ring.

“At the same moment as my mechanical up front the team car was behind the peloton, which was exploding under the pressure of heading into the Trouée d’Arenberg. That was one of the most important sectors of the whole race.

“In the break we were probably riding close to 70 kilometres per hour heading towards the Trouée d’Arenberg. We had to move as fast as the bunch’s speed. I simply could not peddle fast enough in my small chain ring.

“My bike just took a lot of abuse. I could not get a bike change because then it would have just been race over anyway, so I had to carry on, especially with the race exploding from behind.”

A game of cat-and-mouse ensued between world champion Bora-Hansgrohe’s Peter Sagan and AG2R La Mondiale’s Silvan Dillier with about 20km left. The Slovakian managed to win by milliseconds in the final lap of the velodrome.

“I’m not sure I could have done what Silvan [Dillier] did. I have trained with him before so I know how strong he is, but I think I could have gone pretty far yesterday with the good legs I had,” said Thomson. “But at the same time, I can just be happy that my problem was mechanical and nothing worse.

“I could have broken my bike, got punctures at the wrong moments and suffered falls. You have to be happy with what the ‘queen of the classics’ gives you; she can be a feisty one.

“Roubaix can be nasty. She [Paris-Roubaix] bites when you think you are on top of everything and have everything under control.”

He said he had primarily aimed to be in the break in order to help DiData’s trusted rider Edvald Boasson Hagen for the closing stages of the race.

“I wanted to be in the break to be ahead of things so that I was able to help him [Boasson Hagen],” Thomson said.

“Now I was not even able to hold on to the group as they came past me. It was more than disappointing that I could not help him out.”

After his fourth year riding in the Paris-Roubaix, Thomson said it was the first time he had managed to successfully pull off the breakaway move.

“It was a good day; finally this year I managed to get in there. It was good to stretch my legs in a break like that and see what the conditions were like in the race.

“I lost much of the skin from my left hand [as a result of the race], but physically I feel okay, better than in previous years.

“I have pain in small parts of my body, but less than what I have experienced before. It is not often you can walk out of Roubaix and say you’re not completely destroyed.”