Mitchelton-Scott’s Esteban Chaves climbed to victory in the sixth stage of the Giro d’Italia that finished atop Mount Etna in Sicily today. 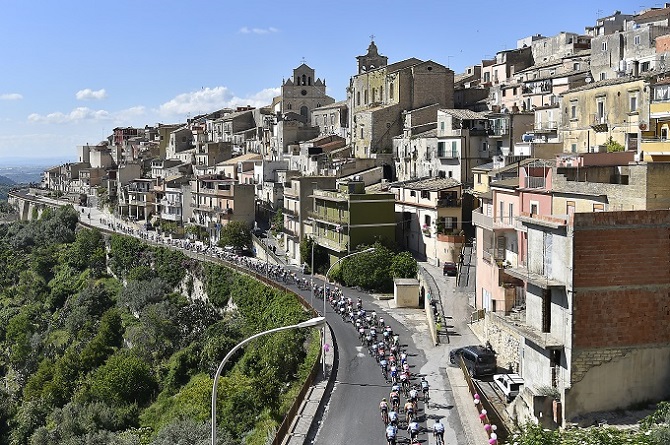 The peloton in action during stage four of the Giro d’Italia that finished in Caltagirone. Photo: Fabio Ferrari/LaPresse

His teammate Simon Yates followed him home a few seconds later, with Groupama-FDJ’s Thibaut Pinot rounding out the podium.

The 169km course featured the first mountain-summit finish of the race.

The stage saw riders conquering the active stratovolcano that covers an area of 1 190 km² and consists of 3 350m of elevation.

The climb up the conical volcano officially started with 15km to go, soon after an 85-second gap was created between the leaders and the peloton.

Astana riders were prevalent at the front of the bunch, while Team Sky’s Chris Froome sat third wheel with teammate Kenny Elissonde helping him.

With 10km left the gap went down to 50 seconds when Bardiani-CSF’s Giulio Ciccone attacked and went clear. The Italian had 13 seconds on the chasing group with 8km left.

The leaders had a gap of 53 seconds to the peloton shortly before Ciccone executed a more powerful attack with 5.8km to go. Chaves was soon on his wheel and then took over the lead.

The Colombian created a 23-second gap with 3.7km to go, but shortly thereafter Yates caught him and took the lead. It did not last long however as Chaves overtook him and won the stage.

BMC Racing Team’s Rohan Dennis lost over a minute on his overall time, causing him to relinquish the pink jersey, which is now in the hands of Yates.

“I don’t know how, but Esteban was in the front there with a really big group,” said Yates.

“That meant we could sit back and I didn’t really need to do anything so I could sit in the wheels and save some energy, because of course we had Esteban in the lead. In the end it worked out perfectly.”

Stage seven features a 159km route, with riders lining up in Pizzo and crossing the finish line in Praia a Mare.