In dramatic fashion, Team Sky’s Chris Froome climbed to victory on stage 19 of the Giro d’Italia atop Monte Jafferau today.

With the victory, Froome took the race lead ahead of Team Sunweb’s Tom Dumoulin in second. Long-running race leader Mitchelton-Scott’s Simon Yates fell out of contention in the general classification after a poor result on the 19th stage. 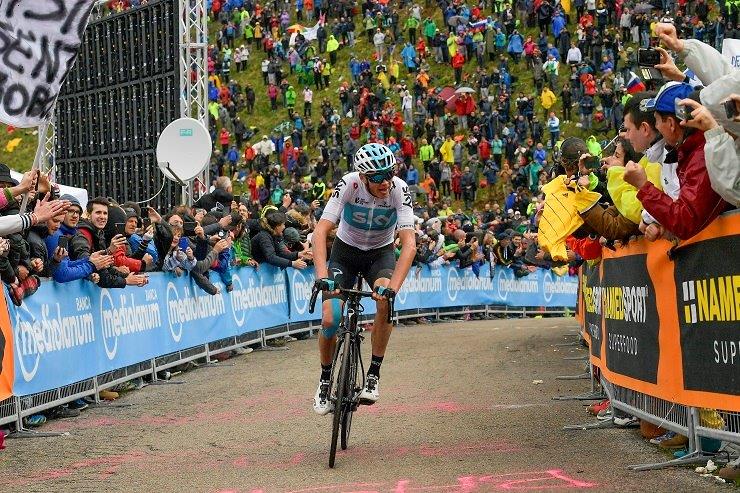 After missing the select breakaway group in the first half of the race, Yates’ chances of retaining his pink leader’s jersey was already in jeopardy. The Briton’s lead over Team Sunweb’s Tom Dumoulin was halved after stage 18.

Froome, who was placed fourth on the GC before the stage, broke away from the group with 80km to go and went solo. With just more than 30km remaining, he became the victual race leader after building a three-minute lead.

Dumoulin was the virtual second-placed rider at the time and he was a part of the chasing group. Froome managed to increase his lead by another 30 seconds over the next 20km.

With 10km left, Froome held a 33-second lead over Dumoulin on the virtual GC standings.

Froome’s lead languished to just over three minutes as he hit the final 7.14km Jafferau climb.

Pinot gave a hard chase in second with 4km to go, as Froome’s lead whittled down slightly to just under three minutes.

Dumoulin joined the chasing group with 2km to go, as Froome held onto a 3-minute and 15-second lead. He needed to win by at least least two minutes and 54 seconds ahead of Dumoulin to take the race lead.

Froome managed to prevail, won the stage, and with it jumped into the pink jersey with two stages remaining after beating Dumoulin by three minutes and 23 seconds, getting a 40-second race lead.

“I don’t think I have ever attacked with 80km to go like that on my own and gone all the way to the finish, but the team did such a fantastic job to set that up for me,” Froome said afterwards.

“It was going to take something really special today to try, and first of all, get rid of Simon [Yates] and get away from [Tom] Dumoulin and [Domenico] Pozzovivo.

“To go from fourth to first – I wasn’t going to do that on the last climb alone, so I had to try from far out and Colle delle Finestre was the perfect place – gravel roads I guess reminds me a bit of riding on the roads in Africa.

“It is great, obviously there’s still a really hard day tomorrow, but the legs are feeling good and I have been feeling better and better as the race have gone on.”

DiData’s Ben O’Oconnor (Australia), who was placed 12th on the GC before the stage, crashed out of the race.