Basson, who rides locally for ProTouch, competed under the banner of Team Baque-Ideus BH, a Spanish team, and narrowly missed out on a podium place after a tight bunch sprint. 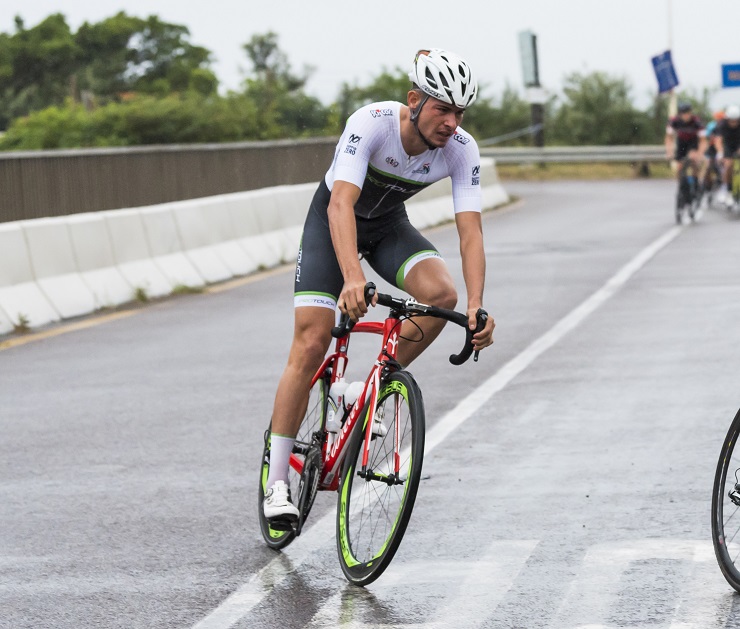 What made Basson’s performance even more satisfying was that he had just recovered from a knee injury that he had picked up in the Czech Republic a few weeks earlier.

“I had a slight niggle after a fall in the Czech race, but then I got a new bike and new equipment and the adjustment made my knee a little worse,” Basson told In the Bunch.

“With the new geometry (of the bike) and new shoes and other equipment the knee got worse. I was putting a different type of pressure on it and had to take off the whole week before the race. I could not train at all.”

He still felt some pain during the week “but I had to push through it because my time [in Europe] is limited.

“I was not sure how my knee would react. The first 60km was undulating and there were a few climbs towards the end.

“Our team decided to stay calm during the first half and target the two bigger and two smaller climbs near the end. We knew a breakaway would not last there.

“The team did well to pull the leaders back and I managed to get into the front group on one of the descents.”

He was fortunate to have one of his teammates with him until he joined an attack on the final climb, he recalled.

“There were about ten or twelve of us and my teammate was still with me. We wanted to leave the attack to a little later but the race ended sooner than I expected.

“When we came around one of the corners there were only 250 metres to go. At that point I was at the back of the group. I had to sprint from there but finished fourth. I still think the race was shorter than it was supposed to be.”

All in all, Basson, who won the inaugural Tour de Limpopo and the Tour Durban at the end of April, was happy with the result.

“It was my first race after the injury and the knee was still sore, especially over the two big climbs. But to come close to winning was good for my morale. I’m happy with the result and so is the team.

“The guys really made me feel welcome and made sure things were as good as possible for me,” he added.

There was no “condescending attitude” towards him, the only foreigner in the team. “They even raced for me, which can be uncommon in some countries where you first have to prove yourself.”

Basson has been riding in Europe for 90-day periods every year since 2014 and says every visit has been a building block.

“I am here for a purpose. I am here to chase a dream and I have to do the hard yards if I want to go professional.

“It includes making sacrifices and facing challenges. One can feel overwhelmed and alone but if I can’t handle it now, how could I expect to do it on the WorldTour?

“I’m learning something new every year. I feel I have made progress and it is part of building towards the future.”

Basson will return to his homeland at the end of August where he will rejoin ProTouch for the remainder of the season.