Tyronne White was glad to get a win in his own backyard when he took the spoils in the 45km Sugar Rush Classic at Ballito in KwaZulu-Natal yesterday. 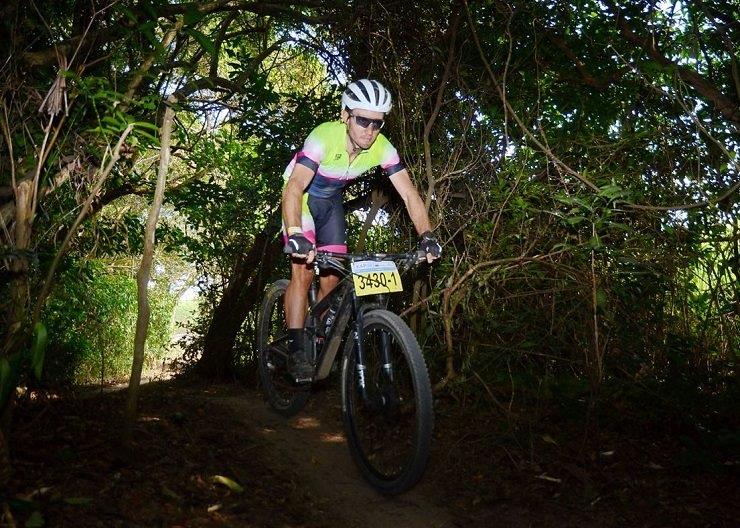 Tyronne White was glad to get a win in his own backyard when he took the spoils in the 45km Sugar Rush Classic. Photo: Tobias Ginsberg

White, who lives in the area, knew it would be a tough task as he came up against the likes of Andrew Johnson, Andrew Hill and Julian Jessop.

“Those riders are super strong, so initially I just had hopes of taking the King of the Mountain,” White told In the Bunch today.

“I know those trails like the back of my hand; I train on those single tracks almost every week.

“I had a feeling they would use two of my favourite single-track sections before the KOM. If my legs were there, I wanted to get on the single track first and create a bit of a gap to survive the climb.

“It played out exactly that way. Once I got over the KOM I saw I still had a decent gap so I just put my head down and went from one single-track section to another.”

Jessop had taken part in the fourth SA MTB Cup Series XCO event at the Mankele MTB Park on the Saturday. White believes this must have taken its toll on the PYGA Euro Steel rider.

“Julian must have obviously had tired legs. I cannot imagine doing an SA Cup event and then a classic the next day.

“But I enjoyed racing at home and on our trails, while competing against some really top guys.”

He broke away approximately 14km into the race, White said. “Then it was just about controlling my effort and tempo.

“I started to feel it a bit towards the end, but thankfully I made it.”