Keanan Roodt has recovered from the injuries he suffered last year and intends making his presence felt in the Jock Classic at Mbombela on July 14.

Roodt, who turns 20 this month, was hit by a car during a training ride, and needed surgery to fix fractured bones in his left leg. “They had to stick a pin in to keep the bones in place,” he said today.

Now he has pinned his hopes on making his debut in “the Jock”, a one-day, three-stage event. 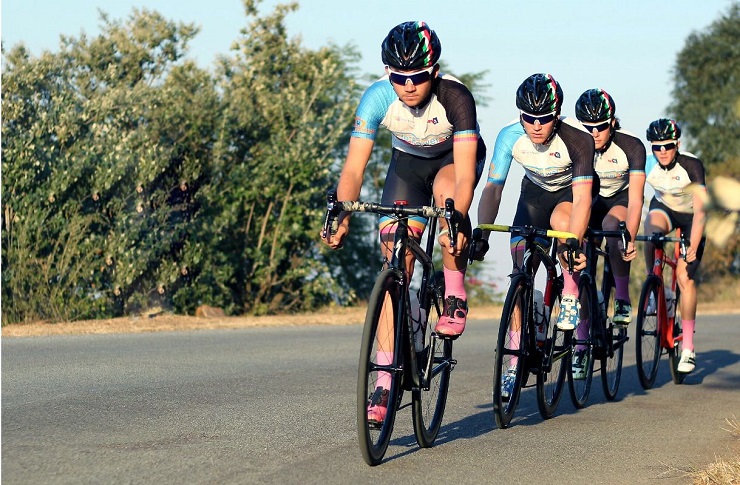 Keanan Roodt (front) has recovered from the injuries he suffered last year and intends making his presence felt in the Jock Classic. Photo: Supplied

Roodt, who rides for Cycle Power, a Pretoria-based team, will bear the leadership responsibility, even though he is the youngest member of the team.

“We all spoke at the beginning of the year about who wanted to target which race and I thought the Jock was a good one for me to be the leader,” Roodt told In the Bunch.

“I’ve never done the Jock, or any other stage race. Especially not one in which all the stages take place on one day.

“The team thought it was a good idea, as long as I adhere to my domestique and supporting role in other races.”

Roodt was injured around October when a car hit him at a “fairly busy” intersection in Pretoria. He was on an early-morning training ride.

“Fortunately, [the driver] stopped, gave me his jersey, called an ambulance and waited with me until I was taken away,” he recalled. “I was sidelined for about five months.”

He resumed cycling about three months ago and was soon eager to race again.

READ |  Vuelta a Espana a step in the right direction, says Nicholas Dlamini

“Once I got back on my bike I really wanted [to race] again,” he said. “I’ve made quite a fast return but perhaps I needed that time off to realise how much I wanted this.

“Now I’m not going to stop. I want to win and make it big in cycling.”

He admits he feels a little nervous about his leadership responsibility in the Jock. “It will be a completely new and different experience for me.

“I’m hoping to get a lot of input from everyone and learn as much as I can. I’ve asked my coach to get me well prepared and he has done a great job. I’m feeling quite strong.”

Roodt has ambitions to ride at WorldTour level. “I want to reach the top in the sport,” he said.