Robert Hobson had a brief but intense learning experience while taking part in several competitive cycling events in Europe since early June.

Hobson, who rode for German-based Embrace the World Cycling, went to Europe with the aim of experiencing “typical European-style mountain-biking which was normally up to 90km with over 3800m elevation”.

He arrived in Koblenz, Germany, home to the Canyon Bicycles headquarters, one of the main sponsors of the team – before taking part in his first race in Rhens, also in Germany, on June 4. 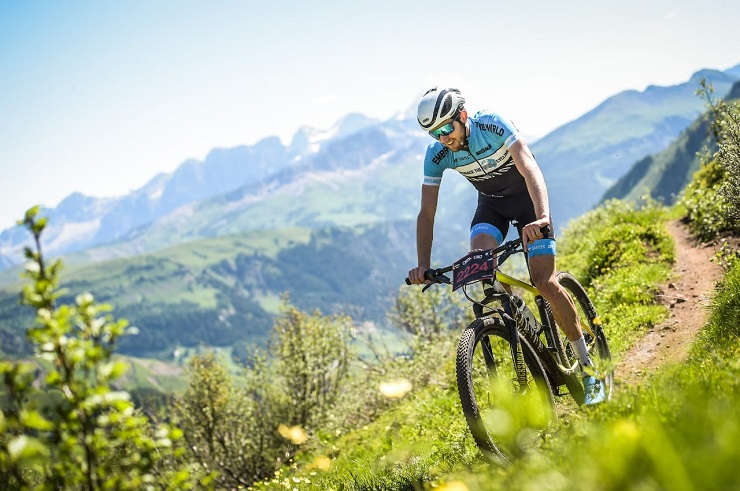 After battling with an injury before heading to Europe, Hobson said he used that race as a “tester”.

“I wasn’t on the bike for two weeks during my injury,” Hobson told In the Bunch. “My strategy was to use the first two races to not really push myself too much.

“[The first] was about 80km in length with about 2200m elevation and that was purely supposed to be just a tester.”

The race, however, did not play out completely according to plan, Hobson said.

“Most of the races in Europe you can ride on a Hardtail [bicycle], because it is really smooth and on the climbs you can save weight.

“But I unfortunately bonked really hard and I finished below 30th place. I didn’t feel too great after that, but I just took what I could from the race and learnt lessons for the next one.”

Then heading to Girona, Spain, a week later, Hobson took part in a 67km race with approximately 2500m of elevation, where he raced alongside Namibian Dan Craven and South African Erik Kleinhans.

“Again, that was not the kind of riding I primarily aimed for. I just wanted to get as much experience out of it as I could.

“It was still really tough and had crazy conditions. There was a lot of mud and it contained many routes and super steep climbs and descents.

“Dan and Erik, due to injury, ended up pulling out. I used what I gained from the first race and it went a lot better.

“I finished 16th overall and first under-23. That felt good, but it wasn’t ‘real’ European racing.”

Hobson then got the experience he was seeking when he took part in a race in the Dolomites mountain range in Italy a week later.

The race was 87km long and had approximately 4200m of ascent. Hobson described it as “probably the toughest race I’ve ever done”.

“That was a proper European experience. It was also at altitude and I was not as well prepared as I would like to have been,” he said.

“I only arrived there two days before [the race] so I didn’t really have a chance to adjust and I have never ridden or climbed in that type of terrain before.”

The racing was of a different style to what he was used to and heading into the race Hobson applied South African standards, which he later admitted “was probably the first thing I shouldn’t have done”.

“In SA the racing has a much higher intensity, so you can go flat-out sooner.

“The race in Dolomites, with over 4000m of climbing, definitely took its toll, so I couldn’t go all out up the first climb and expect to have enough energy for the rest of the route.

“I was told beforehand to pace myself and I did. I tried to pace myself the best I could,” he said, until he “blew up completely” on the third climb, the second last major climb of the race.

“From there on it was just a mental game. I knew I had one big climb left with over 1000m of elevation.

“I suffered and it was actually demoralising, because I was forced to push my bike up that climb.

“Each climb was about 40 minutes long and I raced for two hours more than I was used to.”

Hobson ended up finishing 68th in a field of close to 5 000 riders, a result he described as “disheartening”. But looking back he said he appreciated the experience because it put things into perspective for him.

The Stellenbosch resident then reaped the rewards of a tough journey on the continent when he earned his best result by finishing 14th overall and second in the under-23 category at the Austrian Marathon Championship on June 23.

It was as “tough” as the Dolomites event, which was 90km long and had 4100m of climbing, Hobson said.

His objective was to take all the lessons he learnt from Dolomites to create more attainable goals.

“It worked out well. It was definitely my best race in Europe,” Hobson said.

“I really enjoyed the racing style there; I generally do better when there is more elevation.

“My plan was to progressively move up in the bunch and pace myself properly. I managed to make it into the front-20 group of riders heading onto the final climb.”

He was riding in ninth before suffering a crash with several kilometres to go where he lost five positions in the space of 40 seconds, Hobson recalled.

“Everyone is on such a high level there in Europe that the time differences are so small,” he said.

“I injured and damaged my knee from the crash, the same knee I injured before I went to Europe. Fortunately I still managed to make it to the finish line.”

Hobson was forced to miss his last two races in Europe due to the injury.

He said he hoped his European trip would prepare him for the SA national marathon champs which took place on July 14, but the recurring knee injury ruled him out of the Grabouw event as well.

Now back in SA where he is studying marketing at the IMM Graduate School in Stellenbosch, Hobson’s next main focus, he said, was the Wines2Whales Race on November 2.