It was Broxham’s second victory in a week in Europe, following his first place in a circuit race in Belgium the week before.

The 17-year-old Broxham exceeded his own expectations by winning the six-stage Irish tour. His final general classification time of 12:40:10 was six seconds faster than American Andrew Vollmer’s. 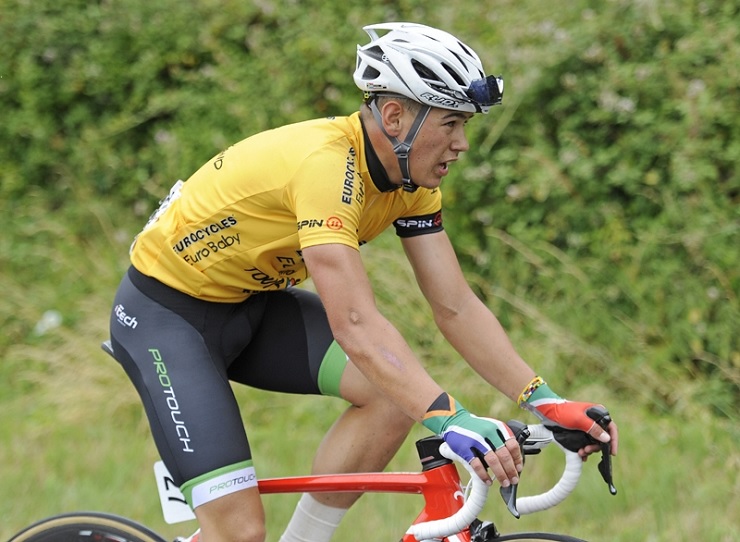 “Last year I finished outside the top twenty, so I thought targeting a top ten this season would be stretching it,” Broxham told In the Bunch today.

However, he felt he was in with a shot after doing well in the individual time-trial prologue, in which he was third.

“I knew the prologue was going to be important, because last year the winner carried the yellow jersey right through from the prologue.

“I started at number 22 and when I crossed the finish line I was second, but I really thought there would be faster times than mine.

“I had been hoping to get at least a top 15, but with just 20 riders to go I was in third and I stayed third until the end.

“It felt a bit unreal. I didn’t expect to finish in the top three. I then knew that I stood a chance on general classification.”

A total of 116 cyclists competed in the tour and Broxham said the competition between the teams was stiff.

“The racing was fast and aggressive from the start. It was hard to stay at the front,” he said.

“You had to stay focused in the bunch. It wasn’t just physical fatigue, but mental tiredness as well. It was a tough tour, but it was great.

“I especially want to thank Tiano. He really stuck it out for me. At first, some of the other guys had their own ambitions, but after the prologue they figured the yellow jersey was more important.

“They really pulled through for me. I needed them on the final day and they dug deep for me.

“During the stages they also carried water bottles for me, which helped a lot in terms of my positioning. I have to give a lot of thanks to the guys.”

The nature of the roads throughout the tour posed a challenge, Broxham recalled. “Alongside most of the roads were little walls, so it was important not to get too close to the edges.

“We had to be mentally prepared for that, but thankfully we did not have any serious crashes.

“On top of that there was a continuous scramble between the riders to get to the front. If you lost focus, you would lose 20 wheels, just like that.”

Broxham now goes to Switzerland where he will train at the UCI centre to prepare for the junior track World Championships, to be held from August 15 to 19.