A member of the Table Mountain Bikers group has been thrown off his bicycle by a wire that was strung at neck height across a trail in The Glen in Camps Bay, Cape Town.

The injured rider was able to walk away, but the incident has caused outrage among cyclists.

Robert Vogel, founder of the group, said the wire was probably strung over the path “out of spite” by people who were dissatisfied with cycling in the area. 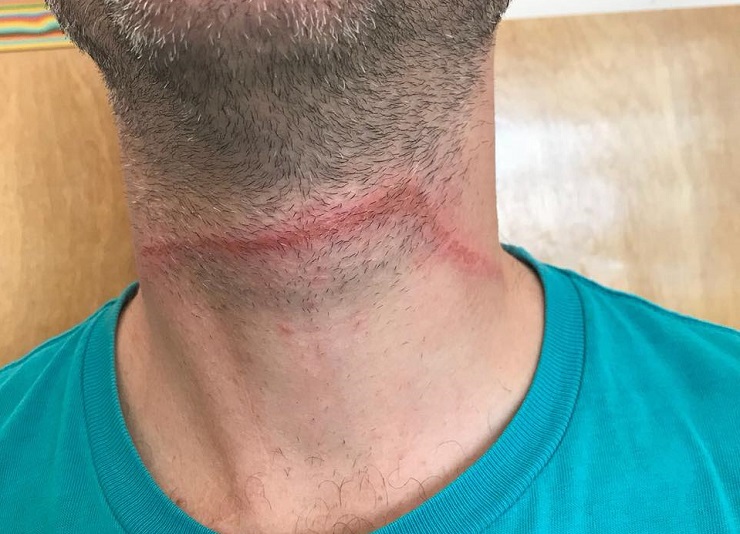 The wounds sustained by the rider who was thrown off his bicycle by a wire that was strung at neck height across a trail in The Glen in Camps Bay, Cape Town. Photo: Facebook/Table Mountain Bikers

Vogel said it was not the first time that someone had attempted to “sabotage” the cyclists, but the seriousness of this incident set it apart.

“About a year ago, logs were dragged across the trail, but the person was caught while doing it. A cyclist caught him; not anyone from any authority.

“Now someone has committed a deed, deliberately, to injure a cyclist, or worse.

“I think they are doing it purely out of spite after being able to walk there for years without cyclists riding on the trails.

“Cyclists are now legally allowed to ride there and some people may feel their space has been taken away. They have no right to say that.”

Vogel, also the CEO of the Pedal Power Association, hopes to find a solution to the problem.

“We have spoken to SANParks (South African National Parks) and they have increased their patrols in the area. We have also approached the SA Police Service. And our Facebook post about the incident has gone viral.

“We are hoping someone can identify the person behind this so that we can take legal action. The rider who was involved is in favour of it.”

Vogel admitted it was not going to be easy to catch the culprit and solve the problem.

“There will always be people who are unhappy about cyclists being allowed to ride on trails that used to be for walkers only,” he said.

“We have had complaints in Kirstenbosch, the Greenbelt and Deer Park, but none of their arguments made sense.

“It’s always the same: ‘You weren’t here before; why are you here now?’ They think we shouldn’t be allowed to ride in the areas; that we will put walkers in danger.

“But look what has happened now: a non-cyclist has severely injured a cyclist.”

Vogel said a brand new wire had been tied to a branch of a tree and stretched down to the trail. Some sort of reinforcement was placed on the edge where it was relatively steep and the wire was then tied around a pole on the other side.

“We feel it was premeditated and thoroughly planned. If that is the case, someone must account for these actions.”