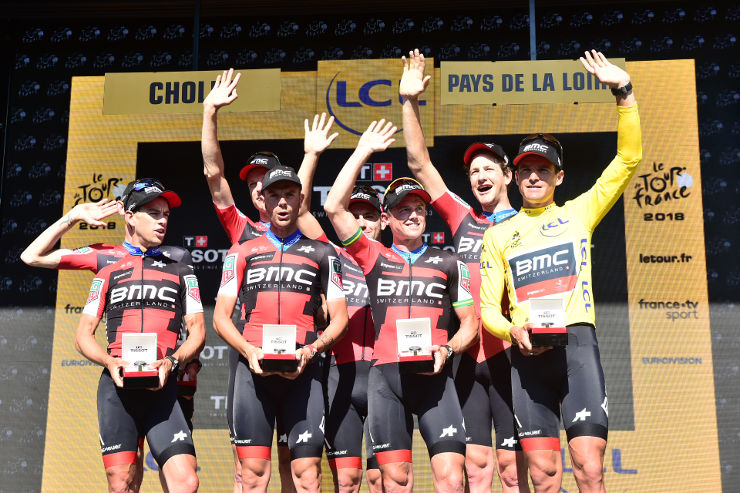 BMC’s Greg van Avermaet, in yellow with his teammates after stage three, maintains the lead in the overall standings after stage six of the Tour de France today. Photo: ASO/Pauline Ballet

Behind the leaders, Dutchman Dumoulin was made to fight for every second after suffering a puncture just over five kilometres out. While he was able to limit his losses, he lost precious time to all of the pre-race favourites.

Roman Bardet, third overall last year and seen as the great French hope to become the first local winner of the Tour since Bernard Hinault in 1985, also had a mechanical late in the stage and lost some ground.

Double stage winner Peter Sagan (Bora-Hansgrohe) extended his lead in the points competition after finishing eighth while his closest challenger, Fernando Gaviria, lost contact with the peloton earlier and was unable to add to his tally.

A group of five escaped early on the stage, building a lead of well over five minutes. They were caught as the race approached the Mur-de-Bretagne for the first time, with the last survivor caught before the top.

The king of the mountains leader, Tom Skujins, accelerated over the top to clinch the points on the top of the Mur, consolidating his tenuous lead in that competition.

A counter attack by Jack Bauer followed before the descent started, leaving the New Zealander with 16km to race to the finish. He was however hauled back with just over four kilometres left, leaving all the favourites the duke it out for the stage spoils.