Heidi Dalton hopes to defend her title at the Race for Victory in Johannesburg on Sunday, having recently returned from a stint overseas.

The 26-year-old is hoping for a repeat of last year when she won the 110km road event after achieving personal success in Europe.

“This will be my second race back in South Africa after racing Cycle4Cansa two weekends ago,” said Dalton, who was based in Lucca, Italy. 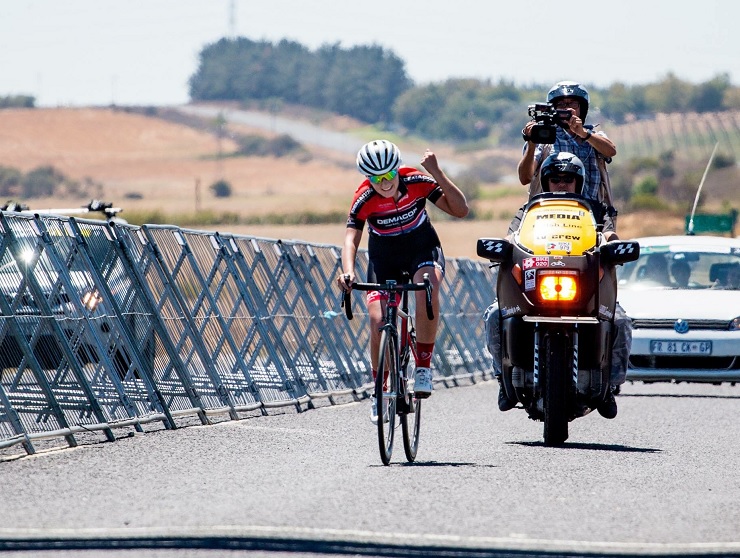 Demacon’s Heidi Dalton hopes to defend her title when she lines up at the Race for Victory in Johannesburg on Sunday. Photo: Stuart Pickering

“Initially I was overseas to compete and I took part in a few events. However I ended up not carrying on with the racing scene there. I love being back in SA and riding here.”

“I never have my own strategy. Demacon race as a team so we will work out a plan before the race and go from there,” said Dalton.

“We have lots of different options which we can play, so I’m sure we will try and make it a hard one.”

She added that when going into any race one always set out to win, especially if you were defending your title.

“However, I think the main goal is just to have someone from our team win.”

Dalton felt the Clover and Cycle Nation teams were always their biggest competition.

“We have four strong riders, so if we ride together and communicate well I’m sure we can defend our win. Demacon have won every race in SA so far [this season], so we will really be trying to keep this up.”

She added that she was not a good sprinter, so leaving it to a sprint finish would not suit her. She enjoyed trying to get into a break and seeing how it went from there.

“I do enjoy this route as it’s not too hilly, but it’s not an easy course either. I’m hoping for some wind as I always love racing in it.”

Dalton felt content with her current form, describing it as “not great, but good”.

“This is only the second race of the second half of the season, so your form is not always at its best as you want to peak more towards the end of the year for the bigger classics.

“But we always enjoy this race and it’s good to see where you’re at for the remaining events.”

She said she enjoyed all the races in the country, but this was one of the top ones as she had won it before.

“I’m looking forward to this weekend and hopefully there will be some good positive racing.”