Alan Hatherly did South Africa proud and achieved a career-long goal when he won the UCI Mountain Bike World Championships in Lenzerheide, Switzerland, at the weekend.

Hatherly, from Hillcrest in KwaZulu-Natal, had had a rather tumultuous season with injury and illness hindering his progress on the bike.

However, a world-class achievement seemed imminent when he produced some momentous results over the past year.

Then less than a month ago Hatherly made history by winning the men’s U23 Mont-Sainte-Anne world cup. He backed that up by clinching the ultimate prize in Switzerland over the weekend.

“Broadly speaking it is every rider’s dream to become a world champion,” Hatherly told In the Bunch today.

“To have claimed it personally feels unreal. Dreams do come true I guess and I’m still a bit lost for words.” 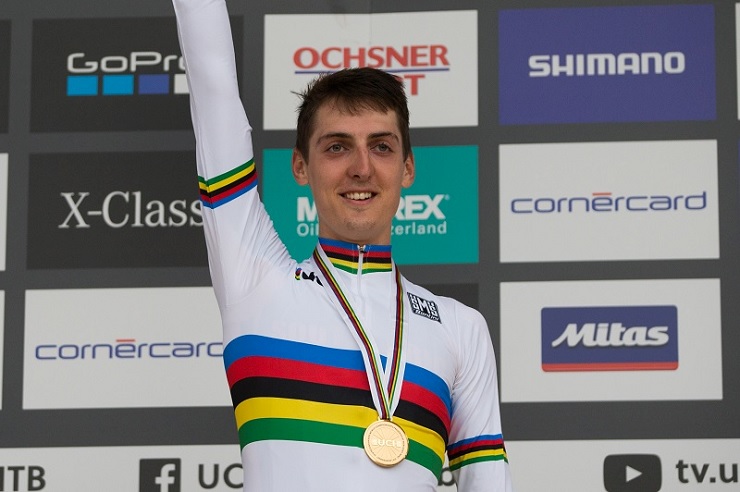 He added, however, that it was a somewhat “bitter-sweet” scenario as he would only be able to race in the rainbow jersey for the remainder of this year before he entered the elite category in 2019.

Hatherly, who was schooled at Hillcrest High, said growing up he began competing in the Schools MTB League, of which he is now an ambassador while riding for the league’s title sponsor, Team Spur.

“I was only eight years old when I started competing in the league,” he said. “That’s where my mountain-biking journey began and from there it just progressed to racing nationally.”

He said he first started racing downhill before he even considered the cross-country discipline.

“I started with BMX racing and I eventually began competing nationally in both cross-country and downhill.

“At first I wanted to be the world champ for both disciplines, but I realised as I got older that that would be a huge task.

“I then decided I would specifically race in cross-country events,” he added.

Hatherly has now competed on the world cross-country circuit for a total of six years – two as a junior and four as an U23.

He felt he made his breakthrough in the U23 category. “Being in U23 was the first time I realised becoming a world champion was a possibility one day.

“In my junior years I struggled a bit with illness and I lacked experience, so I unfortunately couldn’t put those years to good use.”

Each year as an U23 rider Hatherly went from strength to strength, achieving better results with every season.

The first two years, he said, enabled him to gain international experience and to “iron out a few issues I had on the bike”.

“A lot of it boiled down to confidence,” Hatherly said. “It was about being able to know that you can ride out at the front of the field.

“Then realising that once you are able to get to the front it isn’t as tricky as what most people think. The tricky part is getting there in the first place.

“I got my first foot in the door last year when I came second at Andorra [Vallnord world cup] and then another second at the world champs. That opened my eyes as to where I can actually be racing.”

He had attempted to execute it this season despite “quite a bit of bad luck” throughout the year.

“To finish off with a bang in what is probably the most difficult event of the year was unreal.

“With the track having been in Switzerland, in Europe, it was home-ground advantage for the majority of the riders there.

“In SA we don’t really race through mud and over roots that often, so I would definitely say it was one of the most difficult [courses] to ride on for a South African.”

Looking ahead to next year Hatherly predicted a much more aggressive type of racing in the elite category, saying “the guys are closer and if you make one mistake you can lose up to 10 places”.

“The racing is apparently more consistently fast and not as punchy as in U23.

“It will take a bit of adaption to fine-tune my racing, but if I can pull off a few top-10s I will be really happy with the season.”

While growing up Hatherly said the late Burry Stander, who won the 2009 U23 world champs at Mount Stromlo in Australia – the first and only previous time a South African achieved this – inspired him the most.

Stander died tragically in January 2013 aged 25 after getting hit by a taxi during a training ride at Shelly Beach, KwaZulu-Natal.

“Seeing Burry smashing it with the best in the world was a massive inspiration,” he said.

“I unfortunately just missed being able to ride with him, which was very bleak.

“But he originally put SA on the map for us and I’m so proud to have put SA back on the map.

“I hope this can inspire the South African youth that they too can become world champions one day.”

Hatherly will once again ride in national colours when he competes in the UCI Mountain Bike Marathon World Champs in Auronzo, Italy, on Saturday.