Pauline Tunstead could hardly believe it when she won the Karoo to Coast mountain-bike race which finished in Knysna yesterday.

Tunstead, 48, from Port Elizabeth, said that before the race she had just been aiming to break her personal best time and the four-hours-10-minutes barrier.

However, taking part in her sixth Karoo to Coast yesterday, Tunstead managed to smash that time by almost 20 minutes. 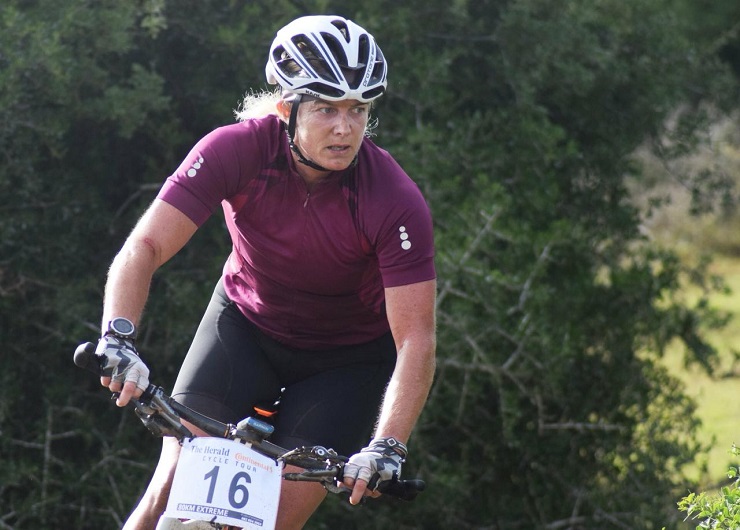 Pauline Tunstead (pictured) could hardly believe it when she won the Karoo to Coast mountain-bike race yesterday. Photo: Supplied

She completed the 96km race in 3:50:39, beating Nicky Giliomee into second place by just over two minutes.

“I couldn’t believe it to be honest. It definitely wasn’t something I expected,” Tunstead told In the Bunch today.

“I was hoping to do well, but I was just hoping to beat my PB. Thankfully, I felt really good on the day.”

After having arrived at the race venue “a little” late, Tunstead started at the back of the A-bunch.

However, she realised she had a slight chance knowing there were no pro riders taking part due to the race not being a Cycling SA-sanctioned event.

Tunstead, who owns Cabinet Concepts in PE, said she started at a steady pace.

“I pedalled up the Ou Wapad climb [the first 10km] quite well and managed to zigzag my way through the field. I felt good by the time I got to the top.”

With the race comprising a total of 4 500 riders, Tunstead said she was not sure how many women were in front of her.

She realised on a steep ascent heading towards the 35km mark, when a camera motorbike was moving to and fro, that at least one woman was still in front of her.

“I then went past her, but the motorbike was still hovering so I asked them how many women were in front me and they said just one.

“That was sort of a motivating factor. I upped my pace a bit and about 10 minutes later, near Buffelsnek [59km in] I saw a really big bunch in front of me.

“That is where I spotted another woman, who I think was Nicky. I was feeling really good and I went past her quite strongly; she looked a bit surprised.”

However Giliomee was “really fast” through a windy and somewhat technical forest section that followed and she was “also strong on the flats”, Tunstead said.

“I thought to myself that the only way to beat her was to take her on one of the climbs.

“I managed to stick with her on the windy sections and I sort of tested her on some of the shorter steep climbs before Simola.

“She dropped back a little but I didn’t know how far back she was. Then on the back of Simola two guys came up to me and told me that she was quite a way back.

“I managed to finish comfortably and it was quite a feeling after winning. I’ve never won something like this before, so I was super chuffed.”

Tunstead mainly specialises in endurance races and won the mixed-team category with her partner Mark Ackerman at the 361km 36ONE MTB Challenge in April.

She also competed in the 227km Trans Baviaans last month and felt all the base miles she put in prior to the Karoo to Coast might have played to her advantage.

“I had a serious crash in a road race last year shortly before the Karoo to Coast which landed me in ICU for six nights.

“I followed a very strict rehab routine to get back on the bike and yesterday was probably the best I’ve felt since the crash.

“The Karoo to Coast is normally an emotional race for me because it is genuinely my favourite. To win it was very special for me.”

NEXT ARTICLE | Hendricks has high hopes after joining German team