Having come close on several occasions, Dylan Girdlestone registered his first win of the season when he soloed to victory in the 98km Tshwane Classic in Pretoria today.

The officeguru racing rider said last month he was annoyed at regularly finishing on the podium this season without making it to the top step.

In Pretoria today, however, Girdlestone finally cracked it, finishing in 2:09:33. He defeated BCX’s Marc Pritzen by six seconds and AC/DC Luso’s Casper Kruger by 20.

“It was a personal thing. You just want to get that win and this was a good race to win,” Girdlestone told In the Bunch today.

“This is basically my hometown and all the roads we rode on today I used to ride on for training, right from a junior to an elite. I’ve been staying here for about 10 years.” 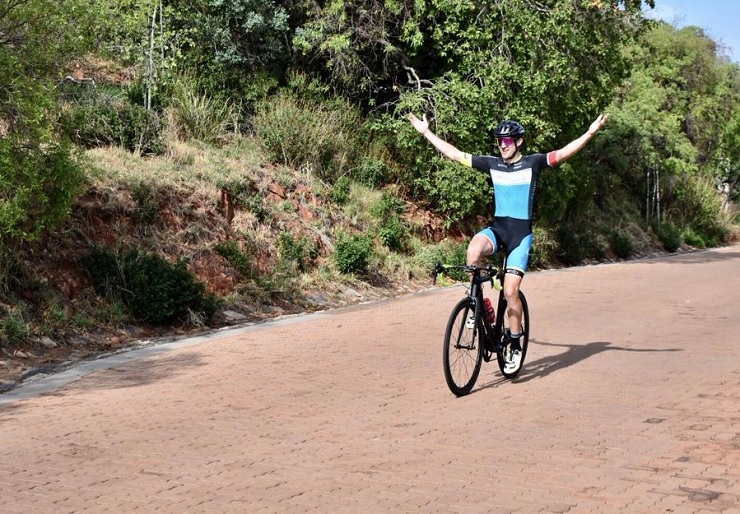 Dylan Girdlestone registered his first win of the season when he soloed to victory in the 98km Tshwane Classic today. Photo: Supplied

The 29-year-old, who has taken on a mentorship role with the under-23 officeguru team, said they did a route recon before the race to identify all the pressure points and work out how to secure a win.

He said the team had three riders in the mix: Alexander Worsdale, Travis Barrett and himself.

“The race played out well. We got two guys in the first move of the day. That was good odds so we just them let go,” Girdlestone said.

“Eventually my other teammate, Ryan Harris, got into a move and shortly afterwards I followed Marc and we jumped across to them,” he said, adding that the rest of the group comprised Brandon Downes, James Fourie and Jaco van Dyk.

“It was a good move and we sort of rolled along together to chase down the break.”

He said they started to close the gap when they rode along the highway from Hartbeespoort towards Pretoria.

The break, having created an approximate two-and-a-half minute lead earlier in the race, was caught by the chasing group caught near the start of the decisive Tom Jenkins climb, Girdlestone recalled.

“That’s the main climb of the race and as soon as we caught them I told Ryan we needed to try get to the front and keep the pressure on and the pace up.

“Alex said he also felt good, so I just decided to save my breath. But when we got to the top of Tom Jenkins he told me his legs weren’t there anymore.”

That was when Pritzen made the “biggest surge of everybody”, he added.

“On the last 200m of the climb I then attacked Marc. He managed to stay on my wheel and over the top of the climb the two of us rode away.

“We then took on a very technical descent down to the Union Buildings and Paul Kruger Square. It was quite a technical bit of road, but the two of us managed to navigate through that quite fast.”

The chasing bunch “struggled a bit”, Girdlestone said, which was when they rapidly created a large gap.

He was happy to stay with Pritzen on the final climb up to the finish because he knew what that ascent had in store for them.

“As soon as we hit that climb I put in a hard surge and I think he started cramping. He lost my wheel. I created a gap and I managed to solo to victory,” he said. Worsdale eventually just missed a spot on the podium, placing fourth, with Harris eventually placing 11th.

Girdlestone said they would take a rest next weekend before the team focused on the 947 Cycle Challenge, a race he said he “always wanted to win”.

“The form is good and again we will have cards to play for that race. If the opportunity arises I would definitely like to win the 947.”

NEXT ARTICLE | David Cooke, 42, surprises himself with Trailseeker victory