Her success came a full decade after the last time she won the event.

De Villiers finished the 121km race, which she described as “a monster”, in 5:38:05, beating Samantha Sanders and Jennie Stenerhag into the lower positions.

De Villiers said her preparation was key to her getting the win today.

“I trained a little differently during the December holiday in the sense that it [the training session] was shorter but harder.” 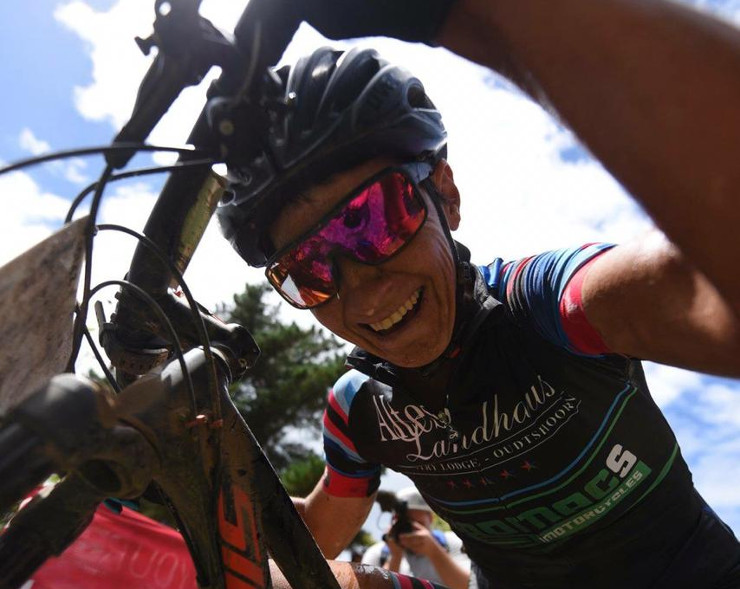 She added that she was also a lot more patient today. “Usually I am a little ‘voor op die wa’, but not today.

“[For example] at the start of the race we were all together until about waterpoint two (about 40km into the race) when three girls (Candice Lill, Sanders and Stenerhag) went ahead and I just left them to go on.”

The 46-year-old mountain biker said the gap had grown to about two minutes by the time she reached waterpoint three in Bonniedale.

“From there on it was more or less open roads but there were still lots of climbs on the way to the finish. So I just tried to stay calm and work hard to try and catch them.”

She said she thought that Sanders, Lill and Stenerhag did not “want to really pace” when they were in front and that this led to a speed decline, making it easier for her to catch up to them.

“At waterpoint five, around 110km into the race, I caught them and we were all together again.”

During the final climb Lill lost contact with the others and it was only De Villiers, Stenerhag and Sanders left to battle it out for the title.

“From there on I just put the hammer down and was lucky to enter the finish area first. So I went for the sprint.”

De Villiers, who stays in Oudtshoorn, said she was delighted to secure the victory after last winning the race in 2008 and 2009.

“I don’t have enough adjectives to describe the feeling. It’s my first race riding for my new sponsor (Altes Landhaus, powered by Madmacs Kawasaki). So, I’m very, very thankful.”

Asked about the route, De Villiers told In the Bunch the Attakwas was “a monster”.

“It’s rocky and loose and it’s got some eye-popping steep climbs.”

She added that on the downhills one “really [had to] hold on to your handles”.

“It’s so diverse. It starts in the Karoo and then you end in Great Brak, which is more in the coastal area.

“So it’s tough and even tougher because it is the first big race of the season. You don’t really know how your form is.”

Next on her calendar is the Midnight Express followed by the Tankwa Trek.

She concluded by saying she was grateful for the support she received from her family.

“Without them it wouldn’t be possible for me to do any of this. Also, all glory to God. If it wasn’t for the talent He gave me all this would not have been possible.”