An in-form Ashleigh Moolman Pasio of South Africa hopes to improve on the fourth place she achieved last year when she lines up at the Tour of Flanders in Oudenaarde, Belgium, on Sunday.

“I’m feeling really good, motivated and excited for the race.

“My form is also on an upward trend. It would be an amazing and special race to get results in,” she said. 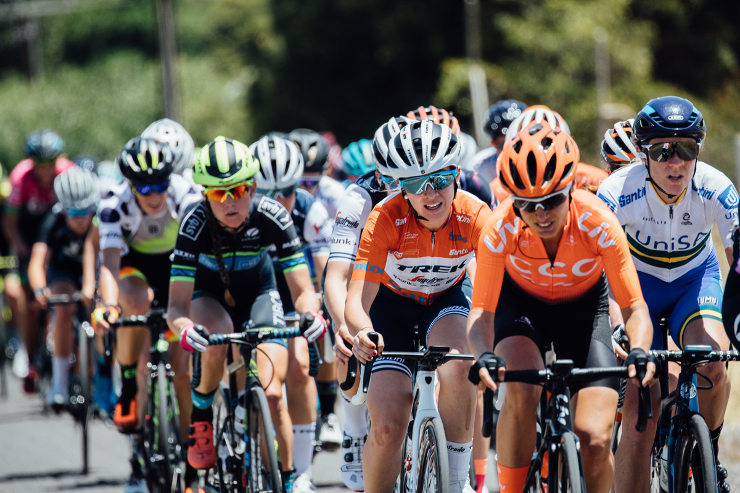 Ashleigh Moolman Pasio (front in orange helmet), pictured during the Tour Down Under, hopes to improve on her fourth-place finish last year when she lines up at the Tour of Flanders in Belgium on Sunday. Photo: Chris Auld/Tour Down Under

The CCC Liv rider said both she and teammate Marianne Vos were in good shape for the 157.4km race and that their goal was to be strong in the final part of the route.

“The final is sort of seen as the last couple of cobbled climbs, starting hugely from the Kruisberg then Kwaremont then Paterberg.

“The team strategy would be for us two to get to the final as fresh as possible and then be able to play our cards and hopefully challenge for a team win.”

Moolman Pasio said it was a crucial race in the season and a good one to start testing her form.

“The focus of my spring season is the Ardennes classics [Amstel Gold Race, La Flèche Wallonne and Liège-Bastogne-Liège], which after Flanders is two weeks away, so this is the perfect timing to test the legs.

“I really feel I will be at my peak in time for my real target races, which also include the Tour of Yorkshire and Tour of California.”

The 33-year-old, who was crowned the SA national road champion in February, said it was an honour to ride in the national jersey in Europe.

“I have had a lot of positive comments in the peloton, especially when I first arrived in Europe.

“Riders like Annemiek [van Vleuten], Anna [van der Breggen] and Amanda [Spratt] have all said kind things like how I deserve to have it and race with it here.”

She said it felt great to fly the flag high and she did not see it as adding pressure on her to perform.

“It’s just an honour and privilege to ride in it and of course I want to represent SA to the best of my ability, but that would be irrespective of what the colour of my jersey is.”