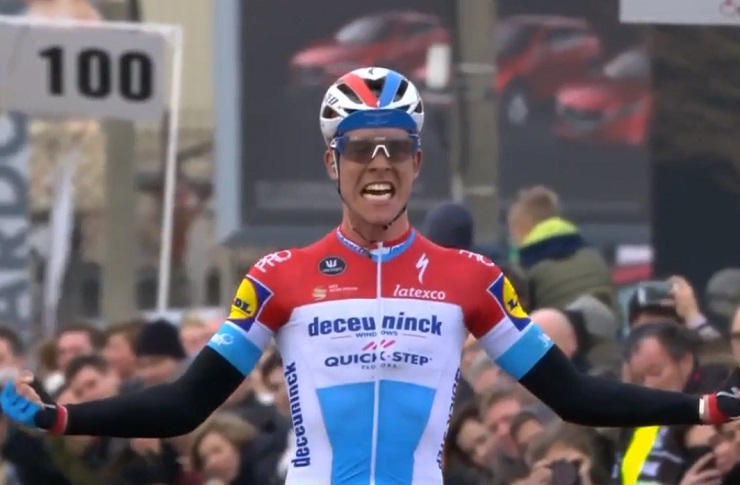 The breakaway had a two minutes and 26 seconds gap on the third climb of the day.

With 50km to the finish, Oliveira decided to go alone and created a 20 seconds gap as he made his way up Berg ten Houte.

Lotto–Soudal’s Tiesj Benoot attacked and pulled out a gap taking some riders with him, including defending champion Yves Lampaert (Deceuninck-Quick-Step).

Benoot’s move was then reeled back in by what was the remainder of the peloton.

When riders reached the Knokteberg, Pöstlberger attacked and caught Oliveira with 31km to go.

The chasing group behind them consisted of Benoot, Jungels, Van der Poel and Turgis.

With 27km remaining Oliveira suffered a mechanical and left Pöstlberger on his own after the former was passed by the chasing group.

Oliveira was then brought back by the peloton as Pöstlberger was caught by the Benoot group, who hit the Varentstraat sector of cobbles.

At this point there were two main groups on the road, which were the leading five-men group followed by the peloton with a 20 seconds gap between them.

With 17km remaining the leaders had a 48 seconds gap to the peloton, with Benoot pushing the pace.

At the 3km to go mark the five riders were still fighting it out between themselves.

Turgis attacked with 500m left, but Van der Poel passed him and took the win.