The Eastern Cape mountain-biker, who has moved to the East African country to work with a development cycling team, says his body wanted to shut down with 40km remaining in the 145km race.

“I was off the bike for two weeks because I was busy moving house so I came into the race a bit too fresh.

“Every muscle decided to stop working and I had to ride through the cramps. Mentally it was also tough, but I overcame it.” 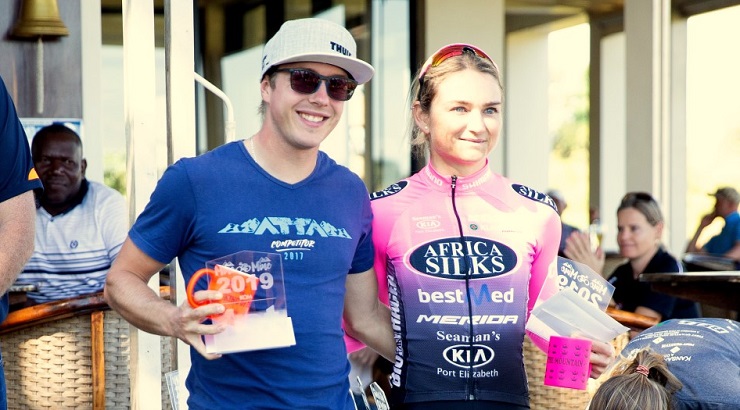 The high temperatures added to his woes.

“The day started off cool but it got up to 32 degrees Celsius, so hydration was absolutely key.”

The 26-year-old managed to work through his obstacles and claim the win in a time of 3:31:41, with Zambians Ray Keane and Bernard Saulombu on his heels.

“I was ecstatic to win, especially as it was a bit of a tough one this year. I was also surprised because I didn’t think I had the legs to be able to do it,” said Meaton.

The Nanaga MTB Race champion said what made the race even tougher was that the organisers decided to split the race up, so there was an amateur group who started at 7am followed by the elite riders an hour later.

This was so that it would be easier for the professionals to race against each other rather than have a whole bunch of riders out on the course with the aim of just finishing the race.

“It was a bit of a touch-and-go situation because if the guys in front got the fastest-paced time – if their overall time was faster than ours – then they would win.”

He said there were about 70 riders in front of his group, which consisted of only about 18.

“We time-trialed for at least the first 90km and thereafter we started attacking each other, because then we had our average speed up and had passed the other group.

“After that it was game on and ‘vasbyt’ the whole way through.

“The guys started attacking me with about 20km to go. I was toast by then and I just couldn’t shut them all down in one shot, but I did whatever I could.

“I arrived at the finish line with the bunch and then gave my all and sprinted to victory.”

Meaton, who has won his fair share of mountain-bike races, said he enjoyed being on tar even though it hurt a bit more than he expected.

“It was fast and technical, a bit like a game of chess on bikes. You constantly have to look out for who is going to be the strong one.

“I also found the route quite pleasant this year. It was completely tarred so that was nice, because there used to be a bit of a gravel section in the middle.”

He kept returning to the event as he loved the area, something underlined by the fact that has moved there.

“It’s a lovely place to ride in. I have a lot of friends up here so it’s great to catch up each year and ride a great event.

“With the ultra-endurance-type format it’s also great for us to test ourselves in that kind of way.”