South African track cyclist Charlene du Preez has been on a year-long mission to garner enough points to qualify for the 2020 Summer Olympics in Tokyo.

The qualification process started officially in July 2018 and since then the 31-year-old has put in prodigious amounts of racing, training, dedication and hard work.

“That’s when the racing started. But after the Commonwealth Games in April 2018, where I still competed in the endurance events, our focus shifted immediately to sprinting,” said Du Preez.

“We’re now in the 2019/2020 season and the chase for points to qualify for the world cups has started,” said Du Preez, who added that the sprint and keirin were the two Olympic events she would focus on. 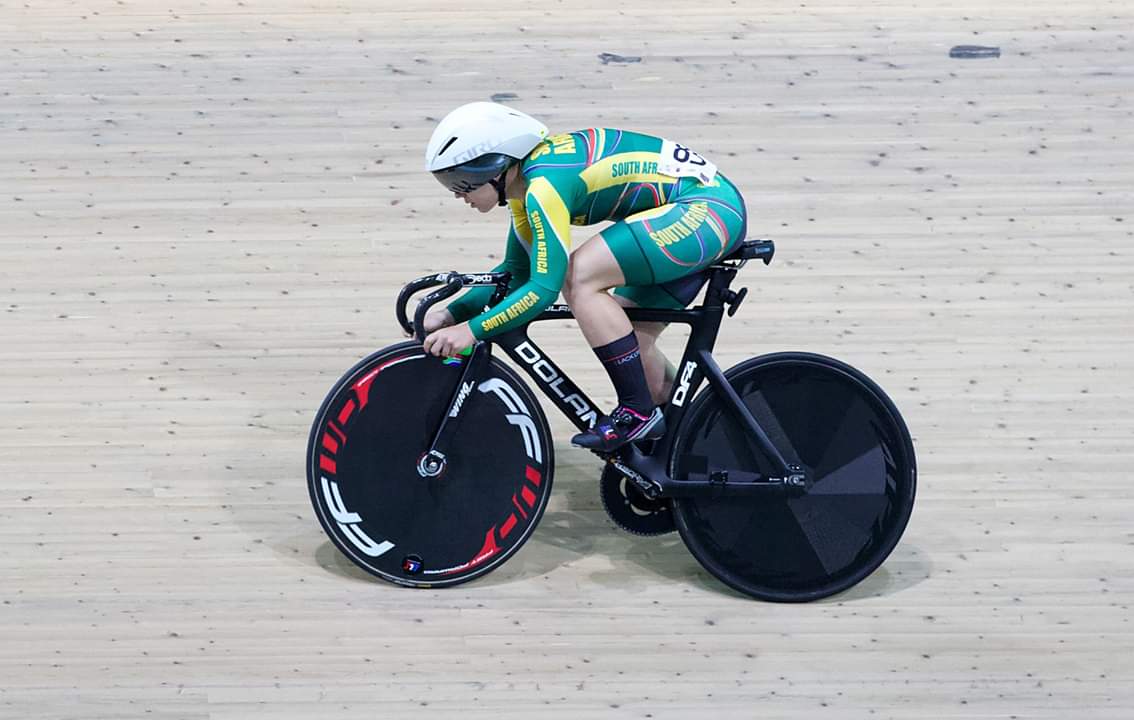 Charlene du Preez has been on a mission to garner enough points to qualify for the 2020 Summer Olympics in Tokyo. Photo: Tomas Gaubys/ToGa Foto

Du Preez has been racing in class-one and class-two races for the past few months and felt sure that she had qualified for the world cups now.

The cut-off for world cup qualification is September 20, with the world cups starting in November.

“In total there are six world cups that I can do, where only the three best will count. The last one is in Canada in January 2020.

“We will have our continentals again before world champs. World champs 2020 are in Berlin towards the end of February.”

Her dream of going to next year’s Olympics arose when she rode the track for the first time in 2015 – and she loved it.

Her passion developed quickly, even though at the time she was not sure what type of rider she was.

There was also no way to measure, because they did not have the high level of competition in SA to enable her to see how she compared with the best in the world.

“It was only after my husband Jaco and I moved to the United Kingdom that I learnt that I would actually be a much better sprinter.

“I enjoy the sprinting much more than the Omnium and it just made sense to rather do something where my heart is.”

The current national and continental champ in sprint, keirin and the 500m time-trial said being an athlete meant you were naturally competitive and the Olympics was the obvious goal to aim for.

“If I have the talent to get there, why waste it? It takes time, experience and hard work to develop into the best possible version of the athlete I can be though.

“My longer term goals are also the 2022 Commonwealth Games and I’m definitely aiming for the 2024 Olympic Games too.”

Du Preez believes that by competing at the Olympics it will mean she has used and developed her God-given talent to the best of her ability.

“It’s almost like answering the question of ‘what is the meaning of life?’ For me it is to honour God in everything I do.

“I’m nothing without Him and it is all because of Him that we are where we are.”

Her career and personal plan for after her long-term goals have potentially been achieved is to stay involved in track cycling.

“It would be ideal if my husband and I can both be involved. I’m not yet sure where and how. We’re thinking of returning to SA at some point. We’ll see how things work out.

“I don’t have too many plans; they seem to always change. Maybe children at some point, who knows?”

Du Preez said during her time racing all over Europe she had learnt some important life lessons.

“It’s really important to always think of what you have in life. It’s easy to get distracted at races, seeing all the other countries with all their staff, all the riders, their set-up, their equipment.

“It’s easy to feel like I’m already at a disadvantage because of what I don’t have. But that is not true. I have faith in God, I have passion, I have determination, I have talent, and I have a bicycle. That’s all I need.

“I also have the support I need from my sponsor Clover, friends, family and Cycling SA.

“Everything always works out the way it should. For some it might take a bit longer to get onto the next step of the ladder, but it definitely is possible.”