Sarah Hill and Theresa Ralph put heart and soul into every pedal stroke as they rode to overall victory in the gruelling Cape Pioneer Trek that finished in Oudtshoorn on Saturday.

The Galileo Risk duo won four of the seven stages, but managed to keep the pink jersey throughout the mountain bike event.

“Winning the Cape Pioneer Trek is something I hold very close to my heart. It’s the first time Theresa and I have ever won against our closest rivals,” said Hill, referring to dormakaba’s Samantha Sanders and Amy McDougall, who placed second, over 20 minutes behind.

“We’re so stoked with this victory. It’s a big UCI and high-profile event so we were happy to have brought the pink jersey home,” said Ralph.

Hill said the race was closely contested each day and she had poured her soul into every pedal stroke. 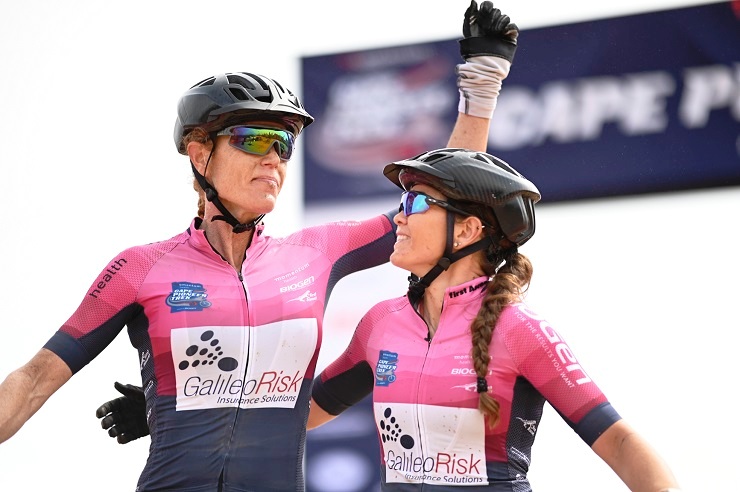 Theresa Ralph (left) and Sarah Hill were the women’s team winners at this year’s Cape Pioneer Trek that finished in Oudtshoorn on Saturday. Photo: Zoon Cronje/www.zcmc.co.za

“What makes the feeling so amazing is that we actually didn’t win every stage. The competition was hot, but we worked our hardest up until the final moment and crossed the line knowing we did everything we could.

“That was the most euphoric relief I’ve ever experienced,” said Hill.

The 26-year-old added that she was a very passionate racer and the beautiful thing about stage races was that as the days passed she became increasingly emotional.

“This isn’t always a bad thing because I dig deeper, work harder and feel more of a sense of achievement after epic days like climbing the Swartberg Pass.

“I want to be stronger and faster so badly that I push my body way beyond its comfort zone. The build-up is always so much to hold onto, and often it ends in a release of tears. Happy tears, I promise.”

Hill said their team strategy changed daily depending on whose strengths suited each stage. So the longer days that featured gradual climbing sections suited Ralph more.

“Whenever the course became more technical and punchy that’s where my strength would come in, so it always switched.”

After the 11.1km prologue, in which Sanders and McDougall suffered a mechanical, Hill and Ralph had a six-minute lead overall.

“This was a crazy thing for us because we’d never been in that situation before,” Hill said. “What we did then was to ride safe to maintain the gap. We knew if we could do that then we could win.”

She said on the 97km first stage they marked the duo and rode conservatively. It ended in a sprint finish, which Hill and Ralph lost, but in the end they did not lose time overall.

On the following 114km stage they took a similar approach, keeping it safe and sticking together. They crossed the line in second again, but maintained their lead.

The next three stages, which covered distances of 76km, 101km and 84km, they won.

“On Swartberg Pass [stage five] we made a big effort to try and break away and I gave it my all. On the climb we got 13 minutes on them, which was a big moment for us because we knew we just had to play it safe till the end.

“It was a huge day for me. I gave it my all and as I crossed the finish line I just burst into tears as I couldn’t believe what I had done.”

Hill said it would have been amazing to win the final stage as well, but she felt she had given so much of herself the previous day she just didn’t have the legs for it.

“I went as hard and fast as I could, but Samantha and Amy managed to break through. They were super strong competition.”

Ralph said overall their team strategy was to finish safe with no mechanicals or injuries.

“We realised we had seven days to conquer so we couldn’t go all out during the first few stages, which were big days.

“We weren’t necessarily going for stage wins as we just tried to keep ahead of Samantha and Amy overall, but we ended up bringing in some wins as well, which was fantastic.”