The two got off to a good start when they won the prologue last Sunday, but they lost valuable time on stage one after suffering a puncture.

“We noticed that we were stronger on the climbs and technical sections so we tried to put the rest of the field under pressure where we could [in order to make up time],” said Du Toit, who hails from Durbanville.

They regained the lead on day five after a series of consistent rides.

“It was cool to gain some time day by day and eventually take the lead when it mattered most.”

Regarding the competition, the 26-year-old said they did not know what to expect from the international field.

“We expected Nico [Bell] and HB [Kruger] to be the main rivals, with Marco [Joubert] and Nicol Carstens right up there. 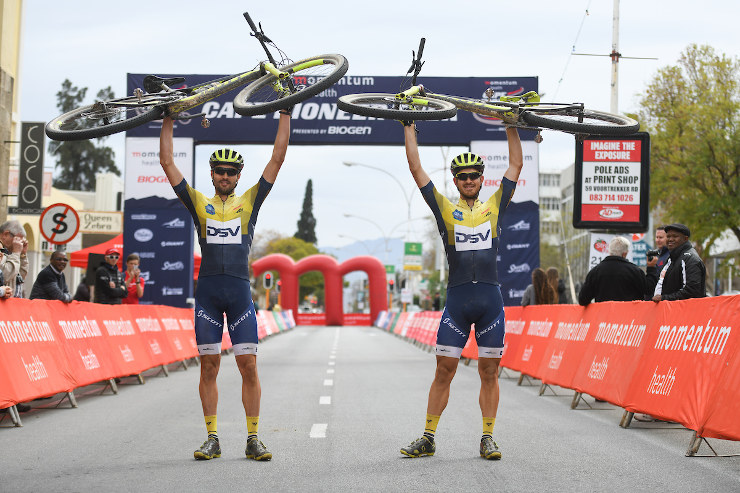 “However, by day one it was already clear that team Asrin (Krenn Wolfgang and Moran Vermeulen) were going to put up a good fight.”

Du Toit said they wanted to stay out of trouble on the final stage as they knew the route included a lot of sharp rocks and “dangerous downhills”.

“It was just safer to be on the front. We made it hard early on and then had a cool day off the front with Imbuko Giant’s Joubert and Carstens.”

The final came down to a sprint, which Du Toit and Heyns won.

“We’re very happy with the win. We haven’t raced Pioneer since 2015.

“Every year it felt like we’ve missed out on some proper racing, so this year we decided to make it one of our focus events.”