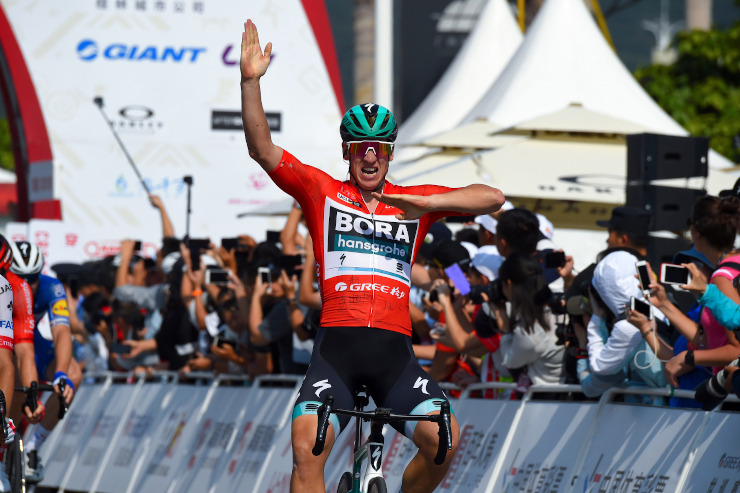 Pascal Ackermann extended his overall lead when he won stage three of the Tour of Guangxi in Nanning, China, today. Photo: Dario Belingheri/BettiniPhoto

Pascal Ackermann increased his overall lead when he won the third stage of the Tour of Guangxi in Nanning, China, today.

The German was closely followed by Belarusian Alexandr Riabushenko and Italian Matteo Trentin in the 143km stage.

“The third stage was harder than it was last year, said Ackerkmann.

He said the plan was to stay with Trentin and be within the first ten riders to go over the final climb, which came at 138km.

“That wasn’t an easy feat, because the ascent was quite hard. I tried to follow Trentin, because we [the Bora-Hansgrohe team] knew he was strong and in the end it was the right decision.”

The 25-year-old said he felt less pressure now since he bagged two second places (stage one and two) and achieved the team’s goal of winning a stage.

“Thanks to the entire team for the great support. I’m happy that I’ve been able to reward their work with this win.”

Mitchelton-Scott’s Trentin trails Ackermann by seven seconds in the overall standings, while UAE-Team Emirates’s Riabushenko is a further nine seconds behind.