Alex Worsdale achieved his highest result in the 947 Ride Joburg on Sunday after a strategic ride for his team which helped teammate Marc Pritzen take the win.

“It feels really awesome to have been able to accomplish this result as a team,” said the OfficeGuru rider, who placed second.

“I doubt I would have got as high a placing as I did if it wasn’t for the help Marc gave on the road when I was under pressure.

“It feels great to have been able to get first and second for the team.” 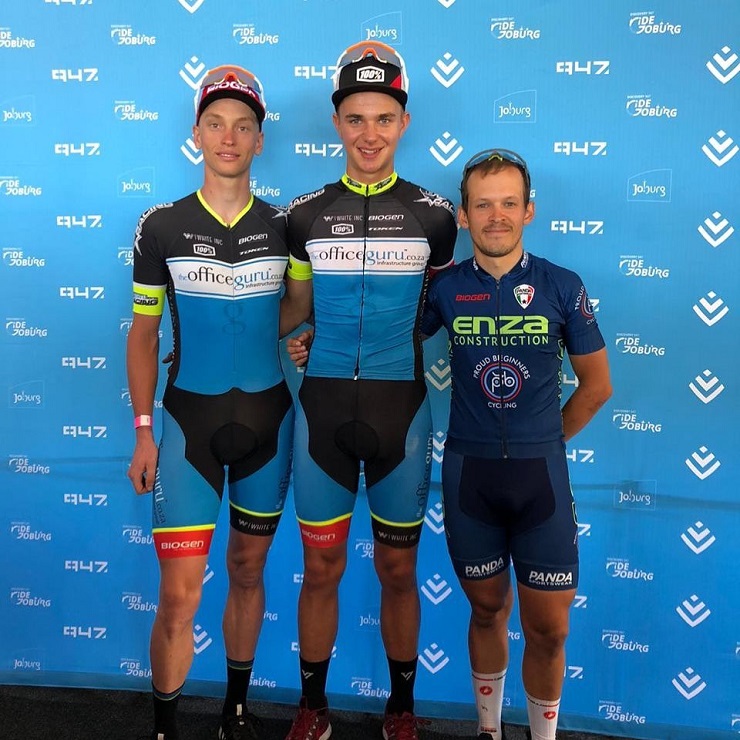 The 20-year-old said their strategy was to get into a small breakaway and take it through to the finish line.

“A breakaway went quite early and we did not expect it to go so soon. It was also larger than expected, but that was part of the reason it was able to go for so long.

“The break consisted of Marc and Travis [Barrett] and I was able to bridge across a minute or two later with Wessel [Botha] and two other guys.

“Other than that there wasn’t any crucial point where there was a major split amongst the breakaway.”

Worsdale said the breakaway continued to grow smaller as the race progressed and once they reached Summit Road he knew Pritzen was the stronger of the two of them on the day.

“My job was to make sure he was kept as fresh, and under the least amount of pressure from the other teams, as possible.

“So I rode on the front in a slight crosswind to keep him fresh. Once we turned left onto Mnandi Road I attacked, but was brought back by the other teams fairly quickly.

“About half a kilometre later I attacked again and was caught by Marc less than 100m before the line.”

Worsdale, whose previous best result was seventh in last year’s edition, felt it was quite a difficult route with the many climbs in the first 45km having the potential to wear people out.

“It suited me as I generally have the endurance to still push hard at the end of a hard race.”

Apart from re-signing with his team, Worsdale hopes to test the international waters.

“I’d like to try racing overseas and also against the best teams in Africa – and perhaps get a gold at a race in a classic in South Africa, as I have not won any single-day race yet.”