Former South African national road champion Carla Oberholzer feels joining the Spanish Bizkaia-Durango team for parts of her 2020 season is the next logical step to take – especially in an Olympic Games year. 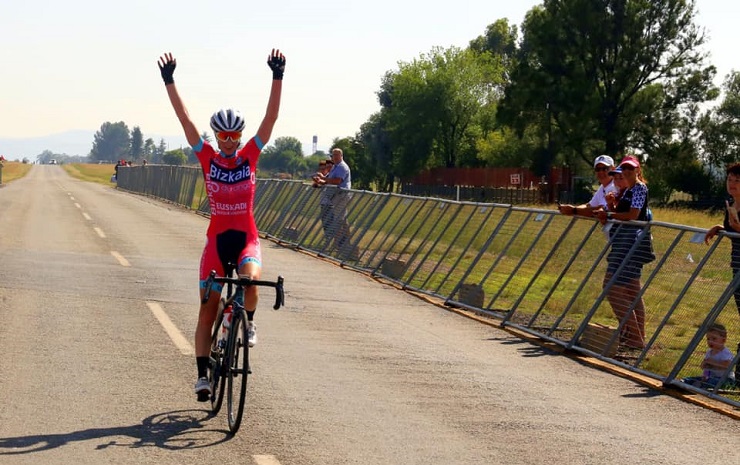 She will be based in Durango during her time with the squad, for which she also rode three years ago.

“I’m in the privileged position of being able to take a step back from working full-time at our restaurant in Clarens,” she said.

“My husband Stefan is picking up the brunt of the responsibilities and I would not be able to go race abroad if it were not for this. My mother will also help us out from time to time.

“I’m extremely grateful for the support I receive from them, as well as from our staff at the restaurant.”

Oberholzer said unfortunately she had had to close her physiotherapy practice for the year because she simply would not be in SA enough of the time to provide quality care to her patients.

“I will return to SA for a bit during the year but will be in Spain 90% of the time. If family can come and visit it will be great.”

She added that she had achieved everything she wanted to in SA.

“I need to push out of the comfort zone and see what else lies ahead,” said the 33-year-old, whose palmares include the Fast One, 947 Ride Joburg, Amashova Durban Classic, Tshwane Classic, trapNET 360, Jock Classic, Kremetart Cycle Race, Berge en Dale and Ride for Sight titles.

Oberholzer’s big goal for the year is to be selected for the Tokyo Olympic Games. And she realises that in order not to be just someone who participates, but someone who makes a valuable contribution towards getting a result for her country, she needs to improve her level of cycling.

“Europe is the only way to do that,” she said.

Oberholzer said she would like to measure herself against the best, but more importantly she wanted to get the best out of herself, something she felt she had not yet done.

“I feel like I have more to give, like I can push myself a bit further still. I’m excited to see how much I can still improve.

“It’s also important for me to try and lift the level of the sport in SA. Until this year we only had Ashleigh [Moolman Pasio] racing in Europe. In 2020 we will be three riders spending extensive time abroad and I hope when we come back we can give back to the riders at home.”

Oberholzer will join the team at their training camp from February 8 and will then do two tours in Spain.

“The plan is to come back for a bit to SA and then go over again towards the end of March.

“I don’t know when I will come back after that as we have an extensive race calendar from then on.”

Oberholzer got her season off to a good start when she won the recent 97km Fast One road race in Meyerton.

“I’m very happy with the win. It’s an indication that training is on the right track coming into the SA national champs in just over a week’s time as well as in preparation for my first block in Europe.

“It’s great to get my first win under the belt for the team and to start the year off on a positive note,” said Oberholzer, who also won the race in 2017.