Anriette Schoeman pushed herself beyond her comfort zone to secure a fighting second place in the 99er Cycle Tour, which started and finished at the Durbanville Race Course in Cape Town today. 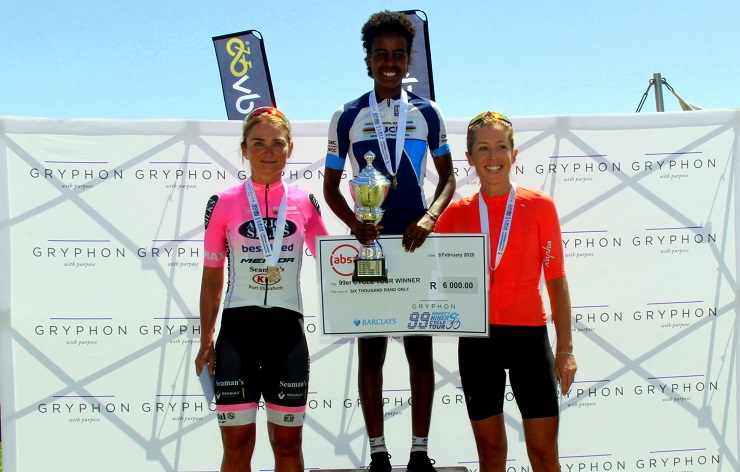 Schoeman (Africa Silks-Bestmed) won the title in 2017 and 2018, but was uanable to compete last year due to illness.

“Considering where my form has been over the last six months I am really happy that I managed second place as I had to push myself beyond my comfort zone today,” the 41-year-old former national champion told In the Bunch.

“I didn’t really have a game plan as it was my first proper race of the year. I’m trying to build my fitness and form back to as close as what it was before last year,” said the seven-time Cape Town Cycle Tour winner, who felt her form was slowly heading in the right direction with a month left before this year’s edition.

The organisers were forced to change the route due to roadworks, which, along with the hot weather conditions, made for a more demanding day out.

“The decisive climb, Vissershok, was within the first 20km instead of the usual last 10km,” explained Schoeman. “The pace was really hard throughout the race and I found myself with two women who are really strong climbers.

“Lucy James made the pace really hard up Visserhok and I just managed to stick in. Trhas Tesfay was also strong but had a guy in the same team as her that kept on working for her and interfering with our race, which was annoying.

“I was a little out of my depth and just managed to hold off Lucy for second place up the finishing drag. She rode a really strong race.

Schoeman started the day with a slow puncture to her rear tubular and was forced to do “some bush mechanics”, sealing it with super glue.

“My rear wheel lost minimal pressure so I suppose my day could have been a lot worse.”