Taking the Tankwa Trek win today was “really important” for Mariske Strauss and Candice Lill as they look towards their Olympic qualification bid. 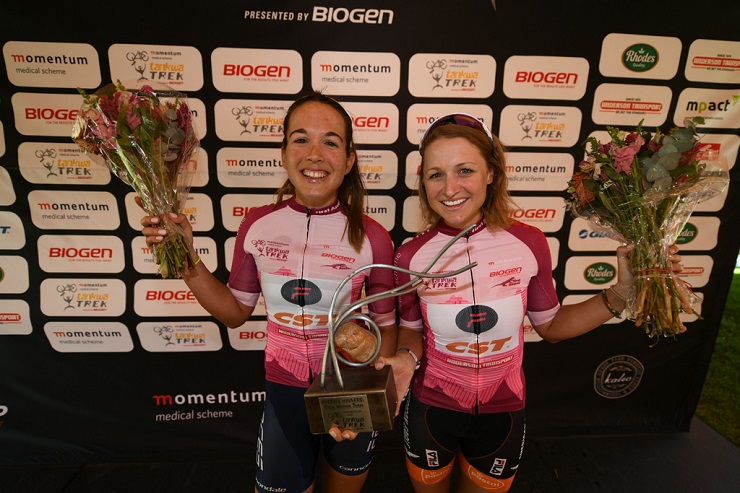 The Faces CST pair won the opening stage but came third in stage two, which dropped them to second overall. They were runners-up in stage three, leaving them third overall.

However their final-stage win – in a time of three hours, 25 minutes and 32 seconds – was enough to secure them the overall victory by two minutes and 14 seconds in Kaleo today.

“It secures us both a good few UCI points, which will help towards our Olympic qualification bid. Part of the plan behind Mariske and me teaming up was to work towards securing two Olympic slots for South Africa.”

After pushing the pace during the first singletrack, they made the race-winning break along the famous Houdenbek trails.

“We pushed hard to get into the Houdenbek singletracks first,” said Lill.

“Then we could control the pace and rely on our cross-country punch and skills to get a gap on the rest of the women’s field.

“At the second water point Darren [Lill] told us we had a 50-second lead. The next time we saw him it was two minutes. But we just kept pushing, because I remembered puncturing in the last 10km of the stage here in 2018.”

Stenerhag and Rieder settled for second on the stage and in the final standings.

“Mariske and Candice were the strongest riders today,” said Stenerhag. “They are deserved winners.”

Robyn de Groot and Adelheid Morath finished third in the stage and also rounded out the final overall podium.

“Once we saw that we could not catch Faces CST or Fairtree today we slacked off,” said De Groot.

“The season is long and while we learnt a lot from the Tankwa Trek we recognised that our energy could be better spent later in the year.”