Tuks’ Andries Nigrini was virtually on top of the world after an impressive performance at the World University Cycling Championships that took place on the Zwift platform recently. 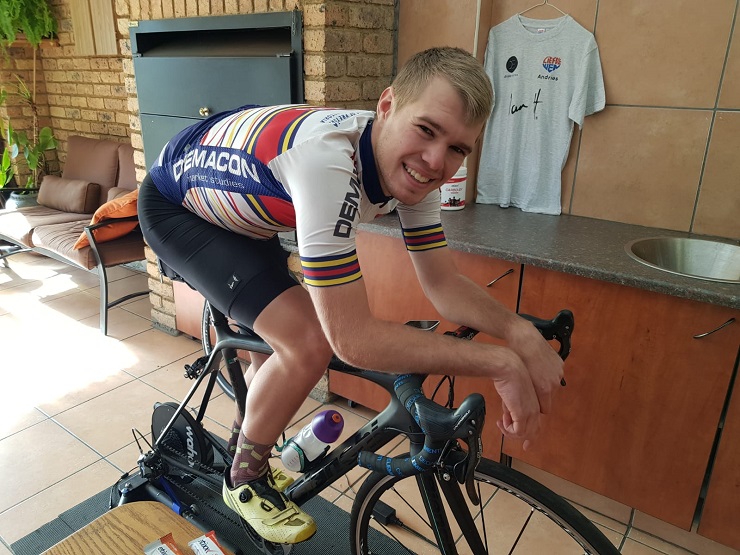 Placing third overall and first in the U23 category of the 46km race against 20 international competitors gave him belief that he could be competitive against his international peers in real-world conditions.

“I know though that I’ll have to level up to make it a reality,” the 21-year-old said after completing the event on the same course that had been used for the 2018 Worlds in Innsbruck, Austria.

Due to online racing being a specialist discipline, Nigrini acknowledged that he did not know what to expect.

“I felt good at the start until we hit the first climb, which was where the race also blew up.

“It was very steep, on average eight per cent, and it took me around 18 minutes to summit,” said the rider from Kempton Park, whose legs “started to rebel” against the punishment.

On the ascent, he lost around two minutes to former champion Adne van Engelen and Jeroen Luijks.

“I rolled them back on the flats just before we reached the second climb and I felt very confident at this point.”

He locked in on a pace that he felt he could maintain to the top with the hope of once again bridging across on the flats that followed.

“I did make up some time, but the gaps were too big to close with what I had left in the tank,” explained Nigrini, who is no stranger to solo efforts having placed third and fourth in the individual time-trial at the nationals over the past two years.

“All in all, I’m glad it was a longer than normal Zwift race and I do feel super chuffed with the result. There were some strong riders, including the previous winner.”

Van Engelen, champion in 2018, went on to take the spoils ahead of Luijks while Tuks riders Kieran McKenna and Luke Bushell also impressed by finishing fifth and sixth respectively.

Nigrini, who rides for the Drake Events Cycling Team, felt the virtual event was a good substitute for the real thing.

“It’s like looking at a video of freshly baked bread still steaming, but you can’t smell it.

“The beautiful thing about it though is that you don’t have to worry about oncoming traffic or crashing out on a sharp bend,” said the industrial engineering student, who admitted he had closed his eyes on occasion to focus on his pedal stroke and breathing.

While it was strange that the entire “crowd” consisted of his family, he said it had been great having them cheering him on.

“Having them around to support me while I was racing was like having a team radio. They followed the event on YouTube, which enabled them to feed me with all kinds of useful information.”

He said the experience made him want to work even harder for the real deal next year, should he be selected to represent his university.