What Julian Jessop hoped would be a dream season, has turned into a real-life nightmare in the wake of a series of bizarre illnesses. 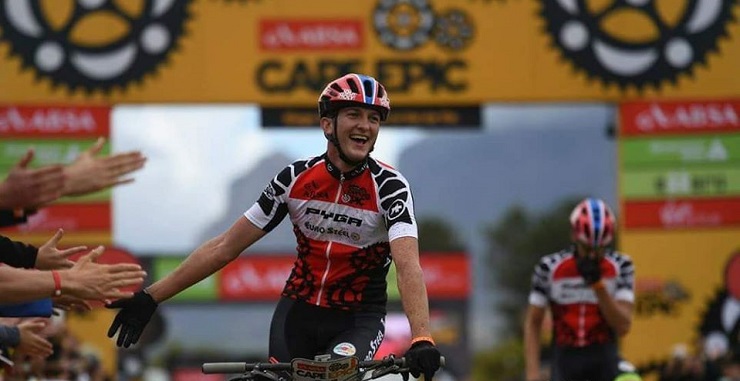 Julian Jessop has suffered from numerous illnesses since the beginning of the year but is keen to join the racing circuit again once the season resumes. Photo: ZC Marketing Consulting

The 22-year-old, who impressed by winning the Cape Epic African Jersey alongside Matthys Beukes in 2018, contracted mycoplasma pneumoniae – a contagious respiratory infection – in January.

Prior to this diagnosis he was one of the first people in South Africa to be tested for the coronavirus as the symptoms were similar, but the result was negative.

“The infection resulted in me spending five days in hospital and then having two weeks of bed rest,” said the former PYGA Euro Steel rider, who resumed training only to fall ill again.

“I had a throat infection which required antibiotics and lots of rest. It took me a while to get back into form again which I eventually did and I was looking forward to riding, but then lockdown hit.”

Jessop, who placed 13th overall alongside Arno du Toit at last year’s Epic, said once he realised that races would not take place for a long period, he approached the University of South Africa (Unisa).

“I requested that they accept me as a late applicant for BCom (Hons) in accountancy, which they did.”

He explained that the programme required four tests to be written throughout the year and that entry into the final exams was based on the best three of those.

“Test one was already written and I had less than a month to get through the syllabus for the second. During this time I was also training on Zwift.”

He wrote the second test on May 5 and, as he had not been able to train outside because of his studies, the first thing he wanted to do the next day was go for a ride.

“But when I woke up I had an intense ear-ache and then continued to feel ill for the next three days.

“That evening while I was brushing my teeth, I realised that I couldn’t move the left side of my face – it was bizarre. I was staring into the mirror and seeing only the right side of my face move.”

It turned out that Jessop had contracted Bell’s palsy, which is a sudden weakness in the muscles on one half of the face, possibly due to a viral infection.

“Due to me pushing myself with training and studying, which resulted in neglecting sleep, my immune system became suppressed.

“An underlying virus then became active and affected the nerve behind my left ear. That is the nerve path on which messages from your brain to move your face are sent.”

Along with Bell’s palsy, he also suffered from a viral infection which caused a sore throat, sore ears, congestion in the nasal passages and tiredness.

“I was again tested for the coronavirus, but it fortunately wasn’t detected.”

Jessop said it had been three-and-a-half weeks since contracting Bell’s palsy and he was feeling much better. He has even enjoyed some easy rides over the past few days.

“With regards to the movement in my face, I have improved a lot. Each day I have small gains, which I’m very happy with.

“The neurologist who has been helping me is confident my face will return to normal.

“I can’t wait to give a big smile again while racing my bike,” said Jessop, who hopes to compete in Wines2Whales, sani2c and some cross-country races when the season resumes.

NEXT ARTICLE | Barrett (still) on top of his game