When the Trans Elands MTB Marathon was cancelled due to the coronavirus, it did not stop race director Leon Claasen from taking on a solo mission to conquer one of South Africa’s toughest 100-milers. 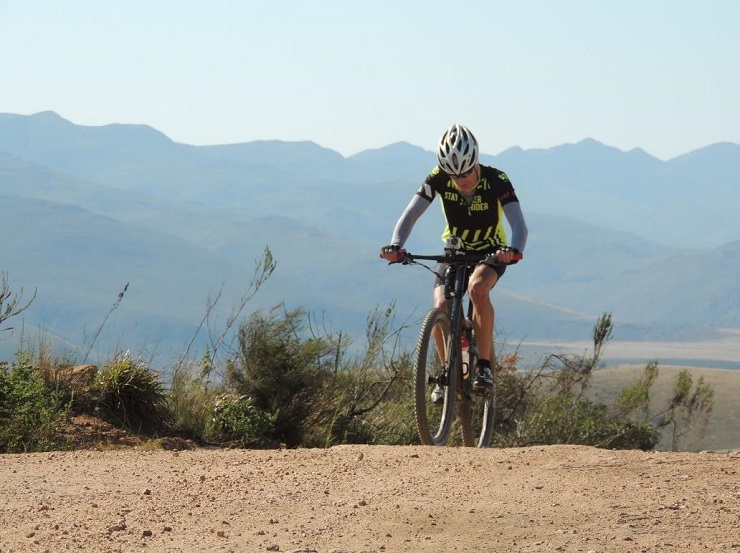 After the event was cancelled due to the coronavirus, Trans Elands MTB Marathon race director Leon Claasen tackled the 160km challenge alone on June 6. Photo: Supplied

The 54-year-old from Port Elizabeth came up with the “crazy idea” just over a week before the 160km challenge in the Eastern Cape would have taken place on June 6.

“Due to lockdown, my training had been far from adequate for an event as extreme as this, but I decided to take it on to raise funds for the CHOC Childhood Cancer Foundation.”

Claasen took part in the first two editions (2015/16), placing second in the mixed section alongside wife Christine and fourth in the solo event respectively.

After race founder Lex Holmes died four years ago, he took over as event director with his focus changing from riding to ensuring others had a great ride.

“What a surreal experience it was to arrive at the Gamtoos Ferry Hotel just after 6am with no music, bright lights, marshals or helpers to welcome everyone.

It was just him and his support team, which consisted of Christine as well as Llise and Mark Dodd.

“Mark was there to ride back-up on his mountain bike at a substantial distance away, while Llise and Christine provided waterpoints and a sweep vehicle – just in case.”

He started at 7am on a chilly but otherwise perfect morning and, when he hit the gravel with the sun and hills rising in the distance, the task ahead started to sink in.

“It felt somewhat daunting to realise that I had about 150km to go,” he admitted.

Unlike on official race day, he had to dismount twice to open farm gates before the infamous Concrete Killer climb, which started at the 17.5km mark.

“All who have ridden the Trans Elands would agree that it is very real!”

He downed a cup of Coca-Cola at the makeshift waterpoint at Loerie Ruskamp and took the opportunity to take off his windbreaker.

“I felt overdressed due to the few early hills and knowing that Lex’s Monster was just ahead.”

That climb was all about finding a comfortable rhythm and maintaining momentum, so two interruptions to fix a dropped chain and open the gate to the Longmore Forest did not help the cause.

“Nevertheless, I did Lex’s Monster in an hour and four minutes, which was not too shabby,” he said, explaining that a sub-hour is the magical mark.

A technical descent to the Elands River Road followed and, thanks to the support team, he arrived at an open gate at the bottom.

After a quick stop at the next waterpoint near the Sand River Dam at 48.5km, he muscled the rolling hills of the Elands River Valley en route to the third stop at the Cheese Shop about 76.8km in.

“It was decision time. Do I stop at the shop or do I push through to the top of the Mast climb?”

As there were no frikkadels and roosterkoek to tempt him, he continued. It was a gamble as he had only one water bottle left.

“As fate would have it, I started cramping in my left hamstring just as I started the climb. My mind was made up though, so there was no turning back and I pushed on until the cramp eventually gave up.”

At the top, Claasen filled up with water and enjoyed the fast descent into Patensie.

While refuelling at the fourth waterpoint, he realised his navigation watch might run out of battery before the finish, which was still 60km away.

“In my haste to leave, I forgot to lube my already screaming chain, so I had to wait until the next waterpoint for that.”

A slight headwind was not helping and neither were a few more cramps through Droëkloof and up the Never Ender climb.

“My watch died while going up, so I switched to recording the last part on a cellphone because, as they say, ‘if it isn’t on Strava, it never happened’.”

At Zuurbron, the fifth refreshment stop 131km in, he lubricated his chain and pushed on in the hope of beating eight hours.

“It was difficult to monitor how much time I had left as I had no timing device on my handlebars anymore.

“Also, since I couldn’t get permission to use the same route as last year through Zuurbron, I had to bypass the farm which meant it was the full length of the infamous Skud, Skommel en Rol Mondplaaspad up next.”

He survived that, but with the tar roads looming, he started cramping again and this time it was there to stay.

“Nevertheless, when I turned left onto Old Cape Road with the finish at the Ferry Hotel just about in sight, and with a welcome breeze from the rear, nothing was going to stop me to push all the way to the end.

His friend Ian Moore was waiting at the far end of the single-lane Old Gamtoos River Bridge to snap a photo.

“I think he probably also bullied the car approaching from the other end to stop before the bridge, which gave me the freedom to take in the beauty of my surroundings and start my finish celebrations.”

Unofficially, he completed the monster ride in eight hours and four minutes.

“There are so many emotions involved,” he said after dedicating the achievement to his late friend and mentor, Lex Holmes.

“You learn so much about yourself if you take on an ultra-endurance event. Although preparation is important, your mind needs to be strong enough to push on despite the physical challenges and any other setbacks along the way.”