They say that if you’re not moving forward, you’re moving backwards – and nowhere is it truer than in the sport of triathlon.

Because, to deliver consistently outstanding performances in three disciplines, you must constantly strive for improvement. That’s not only true for the athletes themselves – their equipment must be perfect, too.

Launched in 2015, the current Canyon Speedmax has had an incredibly successful run at the sharp end of world-level triathlon, with five World Championship victories in the last five years at Kona.

Add to that three European Championship titles, two 70.3 World Championship wins and a world record long-distance time and you have a palmarès matched by none.

However, sometimes building the best is just not good enough. Because, as Markus Fachbach, Brand & Marketing Manager Performance Bikes at Canyon emphasises, “In the same way that our athletes want to continuously improve, our developers are continually endeavouring to set new benchmarks, time after time.”

But how do you make a bike this successful even better and faster? Take game-changing aerodynamic design and make it even more efficient? And improve on such superbly designed integrated storage and nutrition solutions?

After countless hours of CFD analysis and computer simulation, thousands of kilometres of wind tunnel testing in close collaboration with our aero partners Swiss Side and with key input from some of the world’s top triathletes, we’ve achieved exactly that – the next level of performance, across the entire Speedmax product family.

“We focused on three key areas in the development of the Speedmax: aerodynamics, integration and adjustability,” explains Daniel Heyder, Product Manager in the Canyon Road R&D team.

“And the result is two new bikes that are truly standout in their respective performance segments.”

Firstly, there’s the new Speedmax CF Disc. The 2021 line-up starts at R92 000 (including shipping, duties and VAT) and delivers performance on a par with the previous top-end Speedmax CF SLX rim brake range.

Thanks to a completely remodelled design, the new CF is only 0.2 watts slower in the wind tunnel (at 45 km/h) than the bikes that Jan Frodeno and Patrick Lange rode on their way to World Championship glory.

There are six models in the CF range, topping out with the flagship Speedmax CF 8 Disc eTap at R158 000 (including shipping, duties and VAT). All six share newly sculpted tube forms, a new Bento box, a new toolbox above the bottom bracket and an aerodynamically optimised fork with flat-mount disc brakes.

The bikes are fit with proven parts from Profile Design for high levels of adjustability. All are ready-to-race out of the box and selected models come equipped with power meters.

In the bike’s three key development areas – speed and control, maximum system integration and fit and comfort – these models take things further than any other triathlon bike on the scene.

In terms of aerodynamics, they are a huge nine to 10 watts faster than the previous Speedmax. The frame is not only lighter and stiffer, but it also handles better, thanks to improved weight distribution – the result of the smart integration of the hydration system and toolbox into the carbon structure.

“Even when dialling in their fit at home, athletes have more options – and better options – to set the Speedmax up perfectly, without the process becoming too complicated,” says Heyder.

Even when it comes down to fine-tuning with a pro bike fitter, the Speedmax Fitting Kit delivered with the bike contains everything required to adjust the rider’s position down to the finest detail.

All CF SLX and CFR bikes come with power meters for maximum returns on training effort and precise analysis of race performances.

All 11 models in the line-up will be available from today (November 17) at canyon.com.

Models and pricing below: 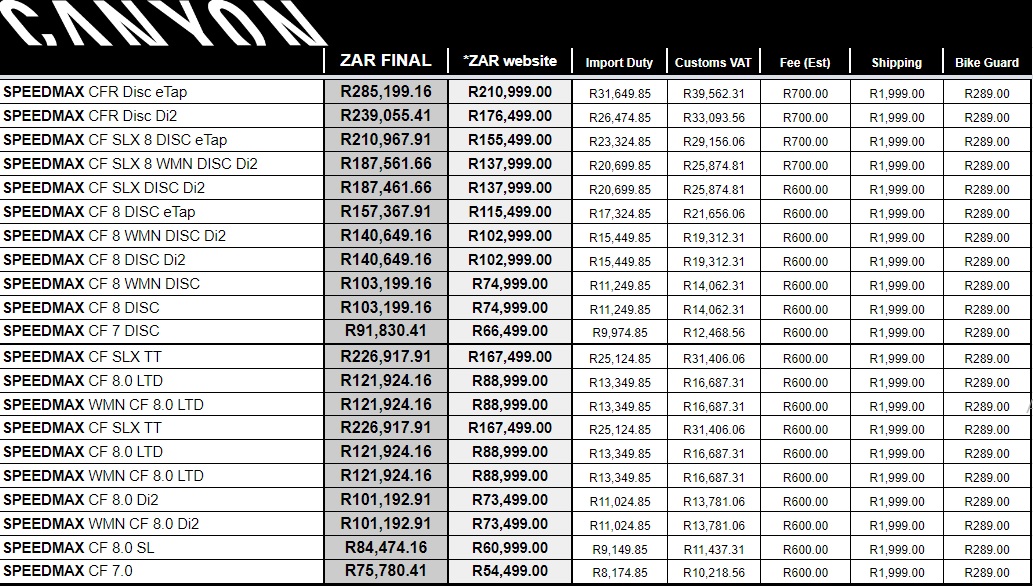 This article is published in partnership with Canyon Bicycles.