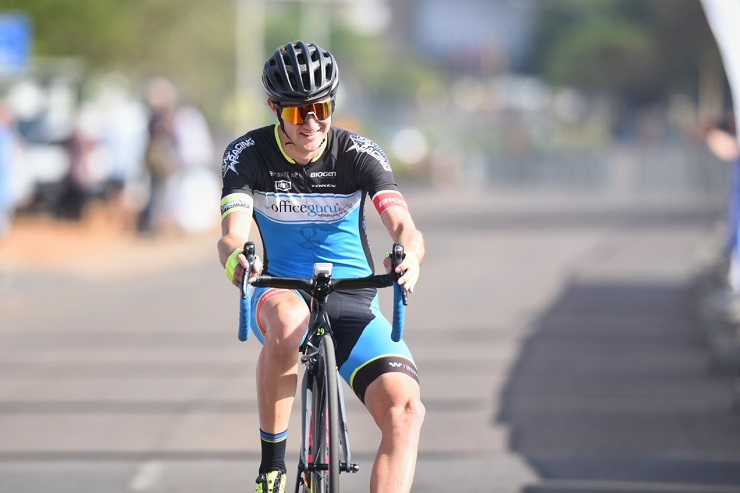 Dylan Girdlestone is expecting stiff competition when he defends his title at the Satellite Classic in Magaliesburg on Saturday. Photo: Henk Neuhoff

Defending champion Dylan Girdlestone has pinpointed the last 30km of the Satellite Classic as a key stretch for anyone hoping to take the spoils.

The experienced OfficeGuru rider, who also placed second in 2018, is familiar with what is required to succeed in the 106km feature race, which takes place in Magaliesburg on Saturday.

The route includes the Hekpoort climb which, these days, greet the peloton early on unlike in the past when it provided a final sting in the tail towards the end.

“Hekpoort is still an important factor, but it’s a very long way from the finish,” said the 31-year-old from Johannesburg.

“Basically it’s the first hit to separate the slower riders from the main bunch, but very seldom will you be able to stay away from the peloton after this climb.

“The race is generally harder later on when you come across 20 to 30km of rolling hills with lots of places to attack – that’s where I think the racing will be made.

“For example, last year I attacked with about 15km to go. Two or three riders came with me and we rolled through until near the end when I jumped them in the last 600 metres to get the win.”

Girdlestone said it wasn’t that the race particularly suited his style – his recent good form in the event had been more a case of good form at the right time.

However, he felt he was nowhere near that level after a year made challenging by the lockdown.

“The ups and downs of Covid-19 have caused so much racing to be cancelled that it is very difficult to prepare for something when you don’t know if it’s happening,” he said.

“So that has been an issue for most pro riders, trying to find the motivation to train for something that might not even happen.

“I haven’t done much in the last two months, attending to some personal affairs, but our team does have some firepower, which will give us legs for the race.

“We are expecting most of the pro teams to be there, so there will be very tough competition, and you also can’t ignore a guy like Myles van Musschenbroek, who is in form after winning the Joburg Classic last week.”