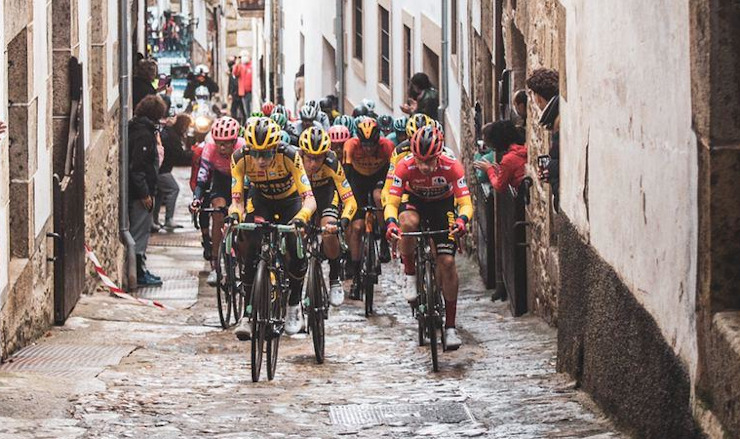 Primoz Roglic claimed victory at the 75th Vuelta a Espana for a second time in Madrid today. Photo: Charly Lopez

Primoz Roglic finally held on to the red jersey on a Sunday to win the 75th Vuelta a Espana for a second time in Madrid today.

Although the Slovenian allrounder looked in control for much of the final Grand Tour of the shortened season, the Jumbo-Visma leader was forced to surrender the overall lead twice to a spirited Richard Carapaz – each time on the Sunday before the rest day.

The tone for the tour – which was reduced to 18 stages as a result of the lockdown – was set on the opening day when Roglic attacked less than a kilometre from the finish on the Alto de Arrate to take the first of his four stage victories ahead of Carapaz and Dan Martin.

However, the Slovenian suffered an off day on the rain-drenched sixth stage which finished on the Aramon Formigal ascent, losing 43 seconds and the overall lead to the Equadorian and dropping to fourth in the general classification.

Roglic however showed that the battle for La Roja wasn’t over when he attacked on stage eight to win ahead of Carapaz atop the Alto de Moncalvillo to reduce the former Giro d’Italia champion’s lead to 13 seconds.

Two days later, on stage 10, Roglic took the third of his stage victories on a flat day with a grippy finish in Suances. A powerful surge at the end saw him finish three seconds ahead of Carapaz and, with bonus times taken into account, end the day equal on time with his rival.

Following a countback, the red jersey was, for the time being, entrusted to the defending champion.

Stage 12 featured the mythical Alto de L’Angliru ascent, with gradients exceeding 23 per cent in places, and it was Carapaz who fought back to put Roglic to the sword. In the end, he gained 10 seconds on the erstwhile leader to take the red jersey into the final rest day.

The ding-dong nature of the race continued the very next day when Roglic’s time-trial skills saw him win the 33.7km individual test between Muros and the uphill finish at Mirador de Ézaro by a single second over Will Barta. More importantly, his fourth stage success saw him wedge open a gap of 39 seconds over Carapaz.

Roglic, who lost the Tour de France at a similar stage earlier this season, grabbed an important second place in the sprint from a reduced group on stage 16 to gain six bonus seconds to extend his lead to 45 seconds over Carapaz going into yesterday’s final mountain test.

After a super fast stage, with rain and mist thrown into the mix, It came down to the seven per cent slopes of the 11.4km ascent of the La Covatilla to decide this year’s champion. It was Carapaz’s final opportunity and he came to the party with a searing attack in the final three kilometres that put Roglic into obvious difficulty.