A big week in the Spring Classics has begun with Philipe Gilbert of BMC Racing claiming victory in the Amstel Gold Race for the third time, with Jelle Vanendert of Lotto-Belisol second and Orica-GreenEdge’s Simon Gerrans third. 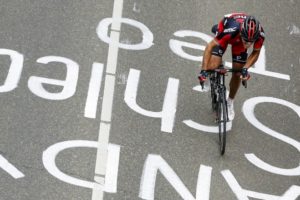 Around 30 or so riders were in contention as the leading group hit the last of the day’s 34 climbs, the Cauberg, being tackled for the fourth time in this afternoon’s race.

Samuel Sanchez of BMC Racing made a big push at the start of the climb, splitting up the group and paving the way for Gilbert to make his bid for glory.

Initially only Alejandro Valverde of Movistar, Orica-GreenEdge’s Simon Gerrans and Michal Kwiatowski of Omega Pharma-Quick Step were able to mount any kind of response, but the Belgian left them trailing.

When he achieved the Ardennes treble in 2011, winning Amstel Gold, the Fleche Wallonne and Liege-Bastogne-Liege, the finish line for the first of those races was at the top of the Cauberg.

Nowadays, it’s positioned 1.8km after the top of the climb, but the extra distance holds fond memories for Gilbert – it’s where he won the rainbow jersey of world champion in 2012. – Road.cc