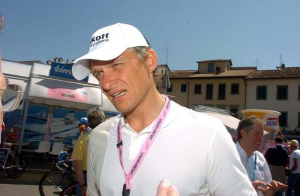 Hello and welcome to my second blog for Cyclingnews. I’m writing after an amazing skiing trip to Kamchatka with our general manager Stefano Feltrin and friends in the far east of Russia.

We went helicopter skiing amongst the active volcanoes on incredible snow. It wasn’t really off-piste skiing because there we no piste. We made them!

While I was away and despite an 11-hour time difference, I kept my eye on the world of cycling and it was great to see Alberto win so well at the Vuelta al Pais Vasco.

Although some of the cycling fans wrote him off last year, I knew it wasn’t the case and that’s why I criticized him and tried to motivate him; I knew he could deliver so much more. Now he has shown it.

He did a superb ride at Tirreno-Adriatico. I think it was one of his best performance in many years. He showed his strength and ability and rode a clever race that blew everyone else away.

Then he was also good at the Volta a Catalunya. He lost to Rodriguez by a few seconds in Barcelona because the parcour was much better suit to Purito but he beat Chris Froome and that has not happened for quite a few months.

At Pais Vasco he defeated Alejandro Valverde with an intelligent performance in the hills and then with a fantastic time trial.

What I especially like about Alberto is that he’s much more relaxed now and in a good mood. I have been talking to Alberto quite a lot during his races and I can see how he is mentally strong and happy now. The stress and frustration has disappeared. Now he knows he is the strongest and the best rider in the world.