Robyn de Groot (Biogen Toyota) continued with her impressive debut season as a full-time mountain biker when she took the iconic Pennypinchers Karoo to Coast title in Knysna yesterday. 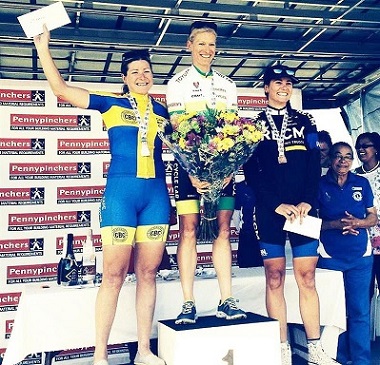 Her time was three hours 29 minutes 18 seconds which was just over a minute ahead of Swedish national marathon champion, Jennie Stenerhag (Cape Brewing Company).

This was the first time De Groot has won one of the country’s oldest mountain bike marathons, which starts at Uniondale and ends in Knynsa.

After claiming second place in her first attempt last year, De Groot used the experience to her benefit, clocking a time five minutes faster than she did in 2013.

“Last year I did too much work on my own and was rather empty in the finale. This year, I rode a lot more tactically and used the bunches that form along the route to save my energy for the finale,” explained De Groot.

READ |  Robyn de Groot: Life has been turned upside down

“I actually got away from the other women on the very first climb, which has quite a loose, tricky surface, but Jennie caught me on the descent and it was then that I realised I need to use the shelter of the bunches as best I can. I reached the last climb with a bit of something left in the tank this year and I put in a surge, which allowed me to get a gap on Jennie.”

READ |  McDougall keen to learn from Spitz at Epic

NEXT ARTICLE | Fouché eyes hat-trick of wins at Campus2Campus