Pro mountain biker Renay Groustra shares his Karoo to Coast experience with us. 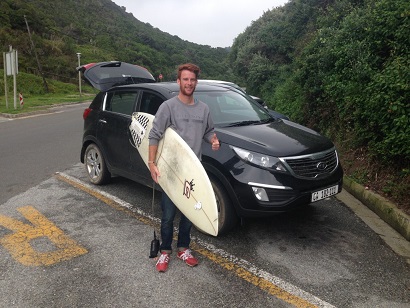 The Pennypinchers Karoo to Coast start line this year was stacked. When I rolled to the start line on Sunday, sans warm up, and took a look at the front row I was a little worried that I might not crack the top 10.

Never mind the 4500 other riders all waiting in their start shoots! Never the less we were treated to a peach of a day with super dry conditions, a bearable minimum, and a low 20’s maximum.

The teams did all the work chasing down attacks, and us privateers took a few risky moves here and there, but up and down the first three climbs, no one could make anything stick. Even I had a little solo attempt off the front. But weighing less than 60kg I soon realised that 60km was far to ride on my own into a headwind with eight strong riders hunting you. I backed off.

Just when everyone seemed pretty content that no one was going to get away, Erik, on a downhill made a high speed getaway. There were 45kms to go and it was mostly downhill, it wasn’t going to stick, and no one chased.

In the back of my mind I knew that if there was one guy in the group who could make it stick, it was Erik. With 25km to go there was no Erik. The pace lifted. With 20km to go, still no sign, and so the pace lifted. 15km, still no Erik!

The eight man chase group hit the bottom of Gouna, the last climb of the day and turned into a flat out hillclimb time trial. We lost three riders on the way up, but most stuck together, with me surprisingly putting in an attack and holding the group rather comfortably.