Way back in 1931 in Copenhagen, the road cycling world championships were held – rather unusually – as a time-trial. 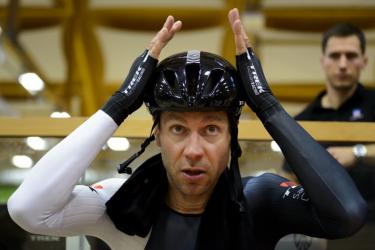 As seemed to be the in-thing then, it inspired Parisian editor Gaston Bénac to organise a race to promote the Paris-Soir, the biggest French evening paper before the war.

He and his colleague Albert Baker d’Isy liked the idea of a time-trial as it was cheaper to get off the ground and easier to manage. The latter named it the Grand Prix des Nations.

In its early years it was a 142-kilometre test against the clock that included three climbs and plenty of cobbles. It was regarded as one of the Classics and it quickly earned the reputation as the unofficial world time-trial champs.

The inclusion of the solo discipline in the UCI Road World Championships in 1994, and at the Olympics two years later, lessened its importance and the governing body eventually dropped it from its ProTour in 2005.

Although the distance varied over the course of its 70 editions, the most modern incarnation was 70 kilometres raced over two loops.

The names of the greatest time-trialists in the history of the sport adorn the honours board, with two of the very best, Frenchmen Jacques Anquetil and Bernard Hinault, dominating with nine and five victories apiece.

Scrolling through the list of past winners, you’ll be hard-pressed to find the name of a rider who wasn’t known as a pure time-trialist in his era. But the name that really caught my eye was that of Jens Voigt, who won in 2001.

With Cancellara, Wiggins and Martin contemporaries of the big German, I suspect not too many of us think of him as a demon against the clock – good perhaps, but not great – even after his recent world hour record at the age of 43.

Those who dig further into his palmares will note a record-equalling five titles at the Critérium International, a two-day race that was often settled by the short individual time-trial.

And, to those who thought Voigt had gone for the record attempt at a whim, or as a cheap publicity stunt that could have gone either way, I would say I think not.

In my opinion the decision was taken much earlier in the season and Voigt was building towards it – and testing himself – all along.

Just think back to the first day of this year’s Tour de France when he set off on a near stage-long solo ride that caught everyone’s imagination and brought him the first polka dot jersey.

I wouldn’t be surprised if he already had the hour record in mind on that day and that he was preparing himself for the physical challenge that he knew lay waiting on the final day of his pro career.

After all – with the words “Shut up legs” emblazoned on his Trek bike – we know he likes to do things the mind over matter way.

His comment afterwards revealed that besides having the physical attributes to ride fast for a long time, he also had the mental aptitude that often separated the good from the great:

“So I had a little chat with my body. What I don’t have is freshness, a sprint, and I don’t have a punch anymore. What I do have is a big diesel engine, the desire to go, and the ability and willingness to suffer for a long time.”

What really impressed me was his courage in accepting the challenge in the twilight of what has been a very successful career. He certainly had more to lose from an unsuccessful attempt than to gain from the now successful one.

And I don’t think he is arrogant enough to think that his mark will stand for long with the big three around – especially with Wiggins already having declared that it was on his to-do list after destroying Martin in Ponferrada.

At my best, I was known for having a strong mind, but age eventually catches up with you and no amount of mental toughness can reverse that process.

Voigt was born exactly seven months before me, so I have no doubt that he was negotiating with his legs to give him just one more hour while the world was watching.