Before there were Anriette Schoeman and Ashleigh Moolman-Pasio, there was Cathy Carstens.

Cathy stormed onto the scene in the mid-eighties and dominated South African women’s cycling for the remainder of that decade. 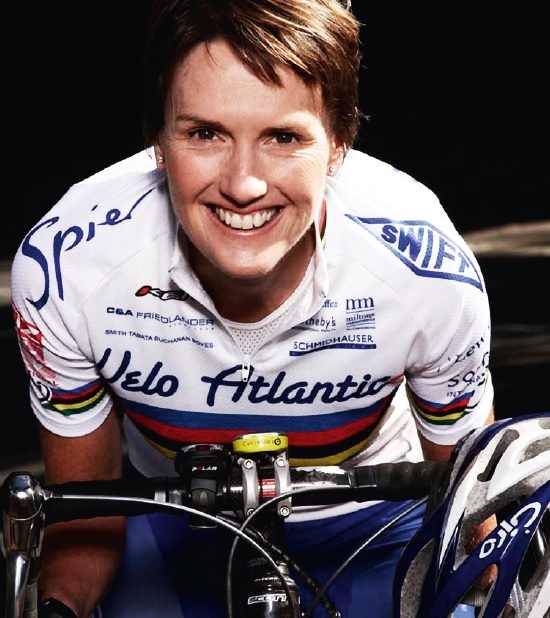 In that time she notched up five Argus titles (now the Cape Town Cycle Tour), another fistful of wins in the 250km Bayside Marathon and three victories in the Star 100 (the forerunner of the 94.7 Cycle Challenge) – in addition to more than 300 fun ride wins.

Among many other achievements, she smashed the Argus record by a full 15 minutes, set an SA record on the track over 3 000m and won the first national road championships.

Having hit the proverbial glass ceiling, and frustrated by the ban from international competition, Cathy went looking for a fresh challenge and found it in raising a family and opening a physiotherapy practice.

She resurfaced in the new millennium, naturally returning to the top of her game and eventually becoming a world champion.

Now, at the age of 52, Cathy’s trail-blazing accomplishments have earned her a rightful place among the Legends of the Pedal – and the distinction of being the first female member of this national hall of fame.

“It’s so sweet of them to ask me,” says Cathy. “It’s really a fantastic concept because he’s (Johnny Koen) making us old people feel good – and it benefits others!”

But all of this would have seemed unimaginable back in 1984, as she lay in a Cape Town hospital with her leg encased in a plaster cast.

Then a successful middle-distance student athlete, with provincial colours in her favourite sport, Cathy had struggled with knee problems from a young age.

“I’d had so much trouble with my left leg. I had operations in Standard Five, Standard Seven and Matric for a dislocated patella.

“And they messed my poor little leg up, so I’ve always had to fight to get back into my sport.”

Having set the University of Cape Town record in her 800m specialist event (which, by the way, still stands today), Cathy was just back on track when a head-on car crash ended her promising athletics career.

“Our rival Maties had actually kidnapped me for fun and I told them they must just bring me back before the koshuis closed. We were driving in the mist and there was a guy reversing on the N2 . . .”

Her troublesome knee hit the dashboard, rupturing the cruciate ligament and causing a decompression fracture of the knee joint.

“They just stuck me back into plaster again for the fourth or fifth time! I came out of that and I couldn’t really walk properly for a long time,” recalls Cathy.

But a fighter by nature, she was more than up for the challenge.

“I think you’ve got this spirit inside of you that just knows. I don’t know where I got these words from but I just said to him, ‘Don’t worry, I’ll be fine’.”

As it turns out, she was more than fine.

After any attempt at running caused the knee to swell, Cathy took up tandem cycling with her then-boyfriend (now ex-husband).

Less than a year later, she had won the mixed category in the Argus tandem event and when her partner couldn’t participate in a race, she decided to go solo.

“It was so funny, I insisted on riding a ladies’ bike!”

After being convinced by fellow SA cyclist Francois du Toit to switch to a men’s bike, she never looked back.

“Your stability’s so much better, especially when you’re climbing. So ja, then I started winning after that.”

Unlike the fun rider focus of modern mass participation events, Cathy says the emphasis back then was on the registered riders.

She remembers starting with the men’s pro field in her first solo Argus back in 1986.

“I was so mad because I stayed with them all the way to the top of Chapman’s Peak but I couldn’t stay with them on the downhills. They were just too hectic, so I thought everything was lost.”

But then the late Peter Haupt encouraged her, saying they could still make it in a sub-three-hour time, so they worked together and did it.

“That was so special,” says Cathy, who finished just over nine minutes behind men’s race winner, the legendary Ertjies Bezuidenhout.

“They were all pros and I was just on this funny old bike!”

In her five-year reign as the queen of that race, she would go on to rack up notable sponsorships from the likes of Pickfords and Le Coq Sportif.

“It was quite hard doing it five times in a row because once I got a puncture and another time somebody fell over me! There was a lot of competition and the girls were good.”

Without the support of a modern team structure, Cathy says her fellow female riders did the best they could with the knowledge they had.

“I didn’t have a coach, and didn’t know what I should or shouldn’t eat; I just rode. We used to do short 40km bunch rides every evening – but we really raced those – and long miles over the holidays.”

She was eventually spotted on the Killarney racetrack by a Belgian talent scout, who offered her a place on the Shimano team. The offer was contingent on her getting her Irish ancestral passport however, as South Africans were not welcome in Europe at the time.

Unfortunately, the passport would only materialise 10 years later.

“I would so, so have loved to race overseas. It was just so sad that we couldn’t.”

Her amateur efforts paid off on the domestic circuit and she won the first unofficial SA champs, and the first official one in her hometown of Bethlehem a year or so later.

“My dad was on the finish line and after winning that I said to him, ‘Okay, now I’m going to have a baby’.”

It was 1990 and having won everything locally that she could, Cathy thought it was time to settle into family life.

“Life is more than racing,” she says simply.

“Who was to know but at the end of that year the whole political situation changed and by then I was pregnant. Can you believe it?

“They sent the girl who came third at nationals to the ’92 Olympics and I thought, ag man, I would have loved to have gone. But I’ve got this awesome son and I’d never change him for anything!”

Always on the hunt for a new challenge, Cathy got the opportunity to start her own practice while pregnant, which consumed her attention for the next decade.

“I was totally immersed in building my business and bringing up my two kids. When they were 10 and 12, I realised they were bored with me, and one of my clients was on my case to start cycling again.”

Then a phone call from Pat White, asking her to attend the Argus’s 25th anniversary celebrations, sparked her curiosity and she entered the race.

“I took my bike down from the rafters of the garage and dusted it off. I told myself I would only stop if I fell off from cramping, but I made it in under three and a half hours, without any training.”

Convinced she could get into an elite team, Cathy started training again at age 41 and this time took a structured approach, complete with coach.

“I tried so hard, did the whole national circuit and finished second overall. But I was invisible because I was older – it was a bit depressing.

“In 2004, I was just half a second behind Anriette (Schoeman) in the Argus and I was on a high. I went for a training ride and then a vehicle rode into me and I smashed my hand.”

History – and a motor vehicle accident – had repeated itself just as Cathy seemed to be gaining sporting ground once more. But, just as before, the end result was more good than bad.

After being out of action for three months, she got back into form for the 2005 national road champs – this time as a vet.

She received national colours on the strength of her performance and was selected to race at the World Vet Road Champs in Austria the following year.

“I finally got overseas and with my Irish passport – the first time I used it!”

She obtained two silver medals there before snatching the gold in 2008.

“How beautiful was that? I’m just so, so grateful!

“Being a world champ was awesome. That experience of standing on that podium . . . you can’t help it but you just cry because it’s just too much.

“You just get that overwhelmed feeling like, wow, it’s just so amazing that you get to stand here and your own country’s flag is being raised and your anthem played. That’s just really amazing.”

Finally having realised her dreams of international competition, one would expect that Cathy would now have laid her cycling ambitions to rest.

When asked whether she still has any aims left to achieve, she laughs.

“Mastering the technical skills of mountain biking! I love it, I was up in the Bottelary Hills this morning and it was just like heaven.”

One of the founder members of the Ladies’ Cycling Association, Cathy says she’s thrilled to see modern women’s cycling getting treated with more respect all over the world.

“Ashleigh’s doing so much for the sport and there are some fantastic ladies like Mariske Strauss also competing right now. I’m really proud of everyone.”

As one of the major contributors on the local front, she looked forward to having her son Deon, daughter Margie, father and loved ones around her at the official Legends of the Pedal function which took place in December.

“My dad drove all the way from the Free State – he’s just turned 80. When I used to ride, he didn’t really bother about my cycling.

“So I sent him my CV to show exactly why they wanted me to be a Legend.