The Cape Winelands MTB Encounter, a three-stage, five-star mountain bike race that starts in Stellenbosch on April 17, has received a boost from long-time cycling supporter Liberty. 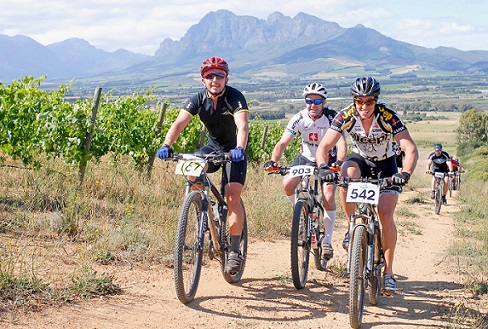 The picturesque wine-growing region around Paarl, Wellington, Stellenbosch and Franschhoek will be the site of the inaugural Liberty Cape Winelands MTB Encounter. This three-day, 175km race starts in Stellenbosch on April 17. Photo: Jetline Action Photo

The inaugural 175km race, which is presented by ASG and MTB Adventures, will see an exclusive field of just 100 two-person teams enjoying some of the country’s best mountain biking terrain around Franschhoek, Paarl and Wellington.

“The Liberty Cape Winelands Encounter represents the next significant chapter in mountain bike stage events in South Africa. It promises to be the most scenic multi-stage event in the country.”

Rebecca Eliot, managing director of the Liberty Group’s value-added services and rewards business, said the title sponsor was committed to investing in and having a lasting impact on communities.

“As a life assurance and investment organisation, we firmly believe that initiatives such as this make a real difference and have a positive impact on the lives of our customers and the broader community.

“We encourage sporting activities because we fully understand that one’s health and wellbeing is crucial to one’s personal success.”

Eliot said that Liberty identified strongly with the ethos of the sport of mountain biking, which was pioneering by nature.

“From a business perspective, mountain biking events are one of the best places to meet and engage with our customers and our mutual interest allows us to promote the Liberty brand to like-minded individuals who share a passion for health, adventure and camaraderie.

“We believe this race has incredible potential to grow into a major South African sporting event and a sought-after fixture on the mountain biking calendar.”

The 67km first stage rolls out from the historic Lanzerac Hotel in Stellenbosch towards Franschhoek, taking in the Jonkershoek Forest and single-track through Banhoek Conservancy.

The second stage covers 53km between Franschhoek and Wellington, skirting the major mountain ranges in the area and passing through the Drakenstein Prison, where Nelson Mandela was held during his final years of incarceration.

The 55km final stage follows an out-and-back route from Wellington and includes some of the well-known Cape Epic trails in the area.